Directed by Wim Wenders
Speaks forcefully to those who believe in angels and their providential place in our lives.

In Faraway, So Close! angels watch over the people of Berlin. The world weighs heavily upon these men and women. Their attachment to things diminishes their desire for the invisible. As one angel laments, "It's so exhausting to love people who run away from us."

Despite the destruction of the Berlin Wall and the end of the Cold War, the people of Eastern Europe are anxious about the future. The angel Cassiel, played by Otto Sand, feels great compassion for them. When a young girl falls from the balcony of her high-rise building, his urge to do good is so strong that he crosses over into humanness and catches the girl in his arms on the street. All he loses in this change of existence are his wings and ponytail.

The earth-bound angel's enchantment with the vividness of life is short-lived, however. A night in jail, an evening of drunkenness, and an experience of homelessness introduce Cassiel to the loneliness, the self-destructiveness, and the despair of the human condition.

Cassiel goes to visit Damiel, played by Bruno Ganz. He was also once an angel who choose to be human in director Winder's previous film Wings of Desire so that he could be with Marion, a trapeze artist. They now have a daughter who knows that angels are as close as a buzz in the ear.

Cassiel's ticket out of poverty is provided by Tony Baker who claims to be in the import-export business. After Cassiel saves his life, this wheeler-dealer gives him a share of the business. It turns out that Baker is making a fortune providing pornographic movies to the East in exchange for guns.

Inspired by a song by Lou Reed, Cassiel realizes that it is time to act like a man and to take a stand against the forces of darkness. Assisted by a troupe of acrobats from Marion's circus, Cassiel lays down his life for his friends.

In Faraway, So Close! Wim Wenders offers us an imaginative look at the interplay between angels and humans. Cassiel's journey through Berlin captures and conveys the demons of modernism which keep humans from any deep interest in the invisible--the frantic rush of life, the separateness of individuals in their own private worlds, and the seeds of violence scattered in images, guns, and economic competition.

At the same time, this touching and fluid movie speaks forcefully to those who believe in angels and their providential place in our lives. Wenders challenges us to think seriously about the mystery that lies at the heart of life--our capacity for good and for evil. This story about Cassiel's sojourn on earth testifies to the narcissism, indifference, and violence of our time. But it is also comforting to know that guardian angels are watching over us and always will. The world is a far better place because they are ever so close. 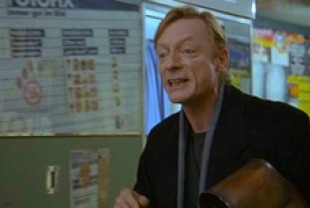