The Journey of Natty Gann

Directed by Jeremy Paul Kagan
A highly satisfying drama set in the 1930s about a courageous young girl's search for her father.

It is 1935 and Saul Gann can't find any good jobs in Chicago. Hard times aren't around the bend, they're on the doorstep. When work in a lumber camp in Washington State is offered, he signs up. But it means leaving his daughter Natty behind in the care of a hotel manager. The spunky teenager soon realizes this woman is no friend, so she takes to the rails. Along the way, Natty is befriended by "Wolf," a wild animal as independent and lonely as she is. She survives a train wreck, shares some tender moments with a pregnant woman, joins a gang of youthful hoboes, spends time in a grim orphanage, receives help from a disfigured blacksmith, and escapes from a molester.

While Natty slowly makes her way across the country, her father is told that she died in Colorado in a train wreck. He plunges into despair. Meanwhile, Natty forms a close friendship with friend in Harry, an experienced drifter who has lost his dad.

Director Jeremy Paul Kagan draws out a touching performance from newcomer Meredith Salenger as Natty; she's a vulnerable tomboy whose supporting actor Wolf provides her and the audience with some magical moments. Ray Wise is excellent as her father who never stops believing that he and Natty will be reunited. John Cusack is very appealing as the shy but seasoned drifter Harry. The film makes a very good case for the primal emotions of family feeling. 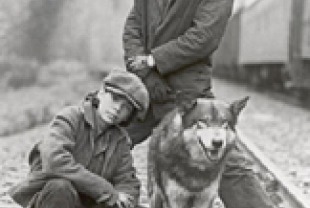