Directed by Phillip Noyce
A timely and formidable screen adaptation of Graham Greene's novel about the terrible aftershocks of a zealous young American's idealism and subterfuge in Saigon in 1952.

London Times correspondent Thomas Fowler (Michael Caine) is stationed in Saigon in 1952. The city has seduced him with its heat, its beauty, and its many mysteries. He is taking it easy even though the French are battling the Communists led by Ho Chi Minh for control of the country. Although still married to a strict Catholic who lives in London, Fowler has an exotic mistress named Phuong (Do Thi Hai Yen) who overlooks their age difference, serves as his escort to social engagements, and prepares his opium pipes at night when he has trouble sleeping. He takes for granted how lucky he is to have such a beautiful companion in public and willing sexual partner in private. Phuong is very happy with their arrangement but hopes that Fowler will eventually leave his wife and marry her. Phuong's pushy sister doesn't trust that the aged journalist will do right by her sibling.

Fowler's placid life is turned upside down when he meets Alden Pyle (Brendan Fraser), a friendly, handsome, well-groomed American from Boston who claims to be in Vietnam with a medical aid project. This young man falls madly in love with Phuong as soon as he sees her. Meanwhile, the reporter has learned that the head office wants him to return to London. He decides to postpone his departure by going after a new story on the intensification of fighting in the northern part of the country. He is surprised to find Pyle there as well. The younger man says he has followed him to tell him of his interest in Phuong. Later, both men are stunned when they arrive in a village that has been massacred. The French, of course, blame the Communists, but to Fowler, this explanation doesn't make sense. It is not in the Communists' interests to be killing civilians, and he realizes this is just the beginning of a much bigger story.

Things become more clear when he returns to Saigon and witnesses a parade for General The, a power-hungry military figure who is raising an army to oppose both the French colonialists and the Communists. When Fowler and his assistant go to the plant of the businessman who is sponsoring this rising leader, they discover shipments of plastics from America that can be used to make bombs. Then two car bombs explode in a Saigon street and 30 civilians are killed and many more wounded. Fowler sees a different side of Pyle that day ordering a police man around and speaking Vietnamese. He begins to wonder who this quiet American really is and what he is doing in Saigon.

Phillip Noyce directs this screen adaptation of Graham Greene's 1955 novel from a screenplay by Christopher Hampton and Robert Schenkkan. Michael Caine puts in an Academy Award caliber performance. The psychological gamesmanship between Fowler and Pyle works well on several levels especially in their battle to possess Phuong. More subtle is their conflict over the proper role for foreigners in Vietnam. The drama vividly conveys the clash between the British journalist's world weary cynicism and the young American's zeal to save Vietnam from a Communist take-over.

The Quiet American belongs in the company of The Year of Living Dangerously, Passage to India, and other bold and inventive cross-cultural cinematic masterpieces. It couldn't be more timely with its critique of the arrogance of a nation that sets out to be a moral policeman for the world. In the end, violence touches more than the innocent civilians who die in the blast. Perhaps the best quotation for this riveting film is from the Protestant theologian Reinhold Niebuhr: "The self-righteous are guilty of history's greatest cruelties. Most evil is done by good people who do not know that they are not good."

DVD extras include an audio commentary by director Phillip Noyce, actors Michael Caine, Brendan Fraser, and Tzi Ma, and some of the production people; behind-the-scenes footage; an "Anatomy of a Scene" featurette from the Sundance Channel about the scene where the bomb explodes in the market; and a Vietnam timeline. 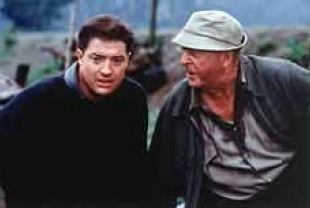 R - images of violence, some language