Catch Me If You Can

Directed by Steven Spielberg
A poignant and convincing movie about the remarkable transformation of an enemy into a friend.

In the Jewish tradition, there is a view that in the world to come, we will all be studying with our enemies. They will be our partners as we review our lives and come to terms with the greed, envy, anger, and hatred on which we have squandered so much of our energy. Why will enemies be our study partners? Because they have the most to teach us.

No movie has ever dealt as poignantly and convincingly with the theme of the spiritual value of an enemy than Catch Me If You Can. It is Steven Spielberg's captivating screen adaptation of the l980 bestseller about one of the world's greatest con men and scam artists, who was the youngest individual ever placed on the FBI's Most Wanted List.

Frank Abagnale (Leonardo DiCaprio) lives with his parents in New Rochelle, New York, and is present when his father (Christopher Walken) wins an award from the local Rotary Club. This adolescent never tires of hearing how his parents met at the end of World War II in the French village where his mother (Nathalie Baye) lived. Frank idealizes his father, a dapper fellow always living beyond his means and filled with dreams of wealth and power. After the I.R.S. investigates his financial affairs, the family loses their home. Learning that his parents are getting a divorce, Frank runs away from home at the age of sixteen. He already has demonstrated a knack for reinventing himself. While attending a new school a while back, he actually presented himself as a substitute French teacher and successfully carried off the role for two weeks before being discovered.

Frank is very impressed with the prestige and the perks given to airline pilots. He pretends to be doing an interview for a high school newspaper and learns all the ins and outs of the vocation from a Pan American official. After he gets a Pan Am pilot's uniform at a New York distributor's warehouse, he dresses the part and is soon flying for free as a passenger on other airlines all over the country. He lives off Pan Am payroll checks that he makes himself. Soon the media are on to the story of "the Skywayman" and Carl Hanratty (Tom Hanks), a determined FBI agent, is on his trail. But Frank always manages to stay one step ahead of him. In Hollywood, the FBI agent is duped by the clever boy and humiliated. This no-nonsense agent, who is viewed by his co-workers as being humor-challenged, only intensifies his pursuit of the elusive "paperhanger" (a check forger and counterfeiter) who by now has stolen four million dollars in his escapades.

Now convinced that anything is possible, Frank decides to reinvent himself as an emergency room supervisor at a Georgia hospital by forging a Harvard Medical School degree. There he meets and falls in love with Brenda (Amy Adams), a candy striper. She introduces him to her parents in New Orleans. Her father (Martin Sheen), the attorney general of Louisiana, is impressed when Frank tells him that he attended the University of California - Berkeley Law School, his own alma mater. Surprising even himself, the wonder boy passes the Louisiana bar exam and is made an assistant prosecutor by his soon-to-be father-in-law. But the wedding day festivities are interrupted by the arrival of Hanratty and his FBI co-workers. Frank flees and hatches one last imaginative escapade to evade those in pursuit of him at the Miami International Airport.

Spiritual writer James Forest has observed: "The most remarkable miracle is not the transformation of water into wine, it is the transformation of an enemy into a friend." Catch Me If You Can charts this remarkable feat in the ongoing adversarial relationship between the audacious teenager and the dogged FBI agent. In one set of intercut scenes, we see Frank getting ready for an evening with a high-class hooker while Hanratty is sitting in a laundromat looking forlorn. Yet Frank is the one who starts a tradition by calling his enemy every Christmas. Both of them are lonely and taken with their cat-and-mouse relationship. Both of them have experienced the disorientation of a broken family. Hanratty is divorced, and Frank is still trying to prove himself to his father by getting back all that was lost years ago: their social status, home, possessions, and suburban togetherness. In the end, Hanratty turns out to be Frank's friend by not only saving his life when the police close in but by then coming up with an idea that will open up wild new possibilities for the gifted con man.

The DVD extras are mostly featurettes: a behind-the-scenes piece, one on the casting, and one on the scoring of the music. The latter includes a discussion between director Steven Spielberg and computer John Williams about their long collaberation. There is also a documentary on the real Frank Abagnale and what portions of his life were chosen for the movie. Another piece talks about how FBI consultants were used to insure the authenticity of the film. 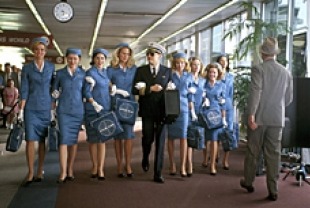 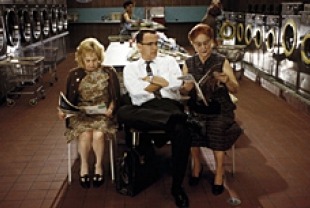