Directed by Edet Belzberg
A harrowing documentary about five homeless kids struggling to stay alive on the streets of Bucharest, Romania.

This harrowing, humanistic work was an Academy Award Nominee for Best Documentary Feature in 2001. For nearly two years, first time filmmaker Edet Belzberg followed five homeless children who were struggling to stay alive on the streets of Bucharest, Romania.

This scraggly gang spends most of their time in a subway station sleeping on flattened cardboard boxes, begging for food, doing odd jobs, and "huffing" — sniffing toxic paint fumes. They drink and wash from bottles of water and steal food from street vendors and garbage cans. Sixteen-year-old Cristina, who wears her hair short so she looks like a boy, is their leader. In an interview, she states, "The fist is all that matters." She tries to keep a tight rein over those under her care, guarding their turf and making sure outsiders stay away.

Ana, a ten year old, takes care of her young brother, Marian, but she is hooked on Aurolac paint. A missionary manages to take these two children to a shelter, but the supervisor explains the difficulties in taking in new kids who are addicted to drugs. Later, Ana and Marian visit their poverty stricken mother, who was not able to take care of them in the past and still feels guilty. As she speaks we realize that these children are the consequences of former Communist dictator Nicolae Ceausescu's policies that outlawed abortion and contraception and that ordered women to bear as many children as possible to pump up the Romanian workforce.

Another street survivor is Mihai, a twelve year old who has fled an abusive father, who admits in an interview that he tied a chain around his son's neck as a punishment. The boy's mother promises to send the social workers her son's papers but never does so. He eventually leaves the subway band and settles down with a homeless woman and her baby.

Macarena was raised in an orphanage and spends most of her time on the streets huffing. She claims that it is better than food. In the last scene in the film, she looks into the camera in a daze and talks about the family that awaits her in another country along with a twin sister with her name.

Children Underground reveals many of the ugly sides of poverty and a society where there is very little love for those who have lost their way. The DVD edition includes "Where are They Now?" updates on the children featured in the film, a biography of and statement by filmmaker Edet Belzberg, and a resource guide to relevant organizations and charities. 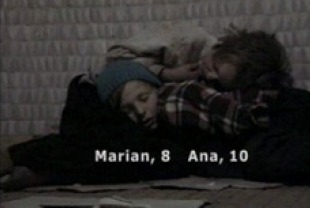