Directed by Michael Apted
Based on Loretta Lynn's autobiography, shows how her marriage keeps changing to accommodate her career as the First Lady of country music.

"Well, I was born a coal miner's daughter / In a cabin on a hill in Butcher Holler," goes the song by Loretta Lynn, who's been called the "First Lady of Country Music." It continues: "We were poor but we had love." This drama is based on her bestselling autobiography.

At 13, Loretta is living with her parents and six siblings in a ramshackle house in backwoods Appalachia. Her father (Levon Helm) works in the coal mines and can barely make ends meet. It seems at the outset that Loretta (Sissy Spacek) will be stuck in poverty for the rest of her life.

Then she meets and is courted by Doolittle (Tommy Lee Jones), a spunky young man who has just returned from a stint in the Army. He immediately takes a fancy to Loretta and buys one of her pies at a church social. Despite her parent's disapproval, she marries him. A fellow tells Doolittle that there are only three choices in Butcher Holler — working in the coal mines, moonshine, or moving down the line. Loretta's ambitious husband decides to emigrate to Washington State. Later, he sends for his pregnant wife. Loretta tearfully says goodbye to her father who assures her she is the shining pride of his life.

Six years and four children later, Loretta has settled into the role of wife and mother. But all that changes when Doolittle gives her a Gibson guitar for their anniversary. Convinced that she can become a star, he gets Loretta a gig at a local bar, leads her to a studio to tape a song she's written called "Honky Tonk Girl," and then hands out a copy of the ballad to every disc jockey from Washington to Nashville. Their grueling tour by car (in which they eat, sleep, and dress) is successful: the song hits the national charts. Soon after, Loretta makes her debut at the Grand Ole Opry.

Director Michael Apted does a stunning job pacing the first segment of Coal Miner's Daughter. His eye for details in the different milieus of Kentucky and Washington helps him illuminate the transformation of Loretta and Doolittle's lives. Sissy Spacek is charming as the child bride and the blooming artist; Tommy Lee Jones is credible and energetic as her domineering husband; and Levon Helm is touching as her loving father.

"Getting here is one thing; being here is another," the overnight success tells her mate. Once Loretta meets Patsy Cline (Beverly D'Angelo), the reigning queen of country music, she sees herself in a new light. Dolittle loses the battle to keep control of her career and bows out of the picture to become caretaker of their children. The money flows in; Loretta becomes a superstar thanks to her continuous singing on the road; her husband manages their new ranch. Although they lead increasingly separate lives, Doolittle is on hand to support his wife when she suffers a nervous breakdown due to exhaustion. In the end, they celebrate their turbulent, oddly enduring relationship.

The screenplay by Tom Rickman is not really about their rags-to-riches lives or the difficulties of show biz. It is an appealing story about a marriage in which husband and wife switch roles and learn to live with each other's personality metamorphoses. Coal Miner's Daughter speaks to the heart and contains enough truths about relationships to make it universally applicable. 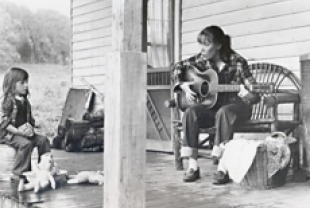