Eat a Bowl of Tea

Directed by Wayne Wang
Explores the pressures put on two newlyweds in Chinatown to meet the expectations of their community.

Director Wayne Wang (The Joy Luck Club) focuses on Chinese immigrants living in New York’s Chinatown in 1949. For years, American immigration laws had not allowed women to enter the country with their husbands. But after World War II, this ban was lifted.

Wah Gay (Victor Wong) runs a gambling club and has not seen his wife in China for 20 years. He orders his son, Ben Loy (Russell Wong), to visit the homeland and return with a wife. Upon his arrival in China, he has a tender reunion with his mother who has lived by herself for years. She tells him sadly, “I wish I could give you some advice about marriage, but I don’t know anything about it.”

A matchmaker soon finds Ben Loy an ideal mate, Mei Oi (Cora Miao). They are married in China and then travel to New York. Wah Gay throws a dinner party for the young couple attended by all the men in the Chinatown community, including Mei Oi’s father. She is thrilled with the conveniences of running water and telephones but soon finds herself stranded in their apartment with nothing to do. Ben Loy takes over the management of a restaurant, a job that means working long hours into the night. But that is not the thorn in his side. Feeling pressured to immediately produce a child, he becomes impotent. A brief trip to Washington, D.C., suggested by his doctor revives the glow of the couple’s early romance but once he returns to New York, Ben Loy has performance problems again.

The screenplay by Judith Rascoe is based on Louis Chu’s novel that does a credible job of depicting the shadow side of community. Once Ben Loy realizes that his father and the old male hens around him expect him to renew their lives by producing an heir, he caves in to anxiety. Mei Oi feels the pressure too, as all eyes are on her to see if she is pregnant. Eat a Bowl of Tea also shows the terrible consequences of gossip and the way it can destroy people’s lives as effectively as a wildfire raging out of control. Eventually Ben Loy and Mei Oi have to stop reacting so strongly to others and forge a marriage on their own terms, even after it is badly shaken by a setback. Trying to meet all the expectations of others is a lousy way to live, and all couples would do well to overcome this obstacle to their happiness early in the relationship. 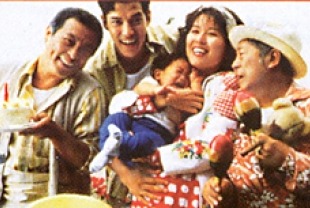