There are 14 1/2 million refugees in the world. At any given moment, millions of them are making their way across borders, being taken overland in trucks and buses, or jamming into crowded quarters in cheap urban hotels. Without the contacts or the resources to negotiate this movement by themselves, about one million a year hand themselves over to people smugglers, who are often untrustworthy. Not knowing the language of the country they are passing through puts them at a further disadvantage. They are usually treated with disdain by locals who see them as competition for their jobs. Since they do not have required papers or ID, they live in fear of arrest and being sent back to where they came from. And despite all the strain of unfamiliar food and surroundings, they need to stay healthy if they are to have any chance of making it to their destination. This is one reason why the young fare better than the old.

In This World begins in February 2002 in Shamshatoo camp near Peshawar, Pakistan, where 53,000 Afghan refugees are housed in primitive conditions. Some of them have been there since 1979 when they fled the Soviet invasion of Afghanistan. Others came to escape the 2001 United States bombing missions. Some were born there.

Sixteen-year-old Jamal (Jamal Udin Torabi), an orphan, earns less than one dollar a day working in a brick factory. When he learns that his uncle is thinking of sending his older cousin Enayat (Enayatullah) to London, this enterprising boy, who speaks English, volunteers to accompany him. "You're better off in your own country," one of the men in the community warns them, but Jamal and Enayat are eager to embark on their overland journey from Asia to Europe.

They travel by bus to Quetta and ride on the back of pick-up trucks across the desert into Iran. Always at the mercy of others, Jamal pays off an officer at a checkpoint station with a Walkman but can do nothing later when a soldier, suspecting they are Afghans, orders them off a bus and has them escorted into the desert and abandoned there. In the Kurdish region, they are befriended by members of a small village who treat them as brothers. Jamal gets to play some soccer, which is the sport of choice in nearly every country they pass through. Crossing over snow-covered mountains at night, they just miss coming into contact with armed soldiers at the Turkish border.

During the most nightmarish portion of the journey, they spend 40 hours in a sealed freight container bound for Italy with other refugees, including a man from Iran with his wife and baby. Only the youngest survive, reminding us of the real-life tragedy of 58 Chinese found dead at in a container in Dover in 2000. In Trieste, Italy, Jamal steals a woman's purse, makes his way to Paris, and reaches Sangatte refugee center. There he teams up with another boy, who has come up with a clever but dangerous way to make the final leg of the journey to London. After finally reaching his destination, Jamal calls back to Pakistan. Captions reveal the fate of this courageous and resourceful young Afghan.

Michael Winterbottom has made an incredibly moving film about the harrowing experiences of two refugees on a quest to find a better life for themselves. It is impossible not to be shaken by the cumulative obstacles and setbacks they face in a journey that grows more dangerous each step of the way. How unsettling it must be to not know whether the man who offers to exchange your money in another country is a kind person or a swindler. Or to not know where the truck in which you are hiding is going. Or to not know if a roommate is a friend of a foe. Not knowing becomes a way of life that drains more energy than anything else they encounter.

In This World was the winner of the Golden Bear, the Prize of the Ecumenical Jury and the Peace Film Prize at the 2003 Berlin International Film Festival. It has a documentary feel to it thanks to Winterbottom's use of small digital cameras and his casting of nonprofessional actors in the two lead roles. The emotionally affecting score by Dario Marianelli also adds to the power of the drama. This important film is perfect for practicing empathy with refugees around the world.

The DVD is introduced by director Michael Winterbottom and has bonus footage with commentary from Winterbottom and screenwriter Tony Grisoni. The theatrical trailers, production notes, and biographies are also included. 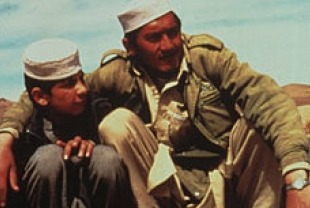 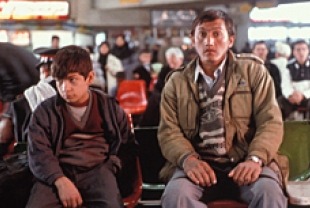