Directed by Olivier Assayas
A French high tech thriller that explores the omnipresence of power in business, sex, and the inner worlds of fantasy and voyeurism.

Diane (Connie Nielsen) works for the Volf Group, a French-based conglomerate that is interested in expanding their operations by acquiring TokyoAnime, an animation company poised to demolish its competition making pornographic images for the Internet. A company called Megatronics that will be in jeopardy if this deal goes through hires Diane to work against their rival from within. This fast-paced and visually exotic high-tech thriller depicts all the dirty tricks of corporate wheeling and dealing.

Diane is a cool and cruel operator who works hard to stay in control in all her business dealings. She pushes ahead of a colleague but later discovers that the woman's assistant (Chloe Sevigny) is busy trying to sabotage her efforts. Diana also is worried that having sex with Herve (Charles Berling), another executive in the firm, has backfired. But her most formidable adversary is Elaine (Gina Gershon), the representative of Demonlover, an American sex-and–violence website. She is a very tough customer who has a whole bagful of tricks of her own to unleash against Diane.

This French film by writer and director Olivier Assayas zeroes in on the amoral gamesmanship of these high stakes corporate players who have no qualms about doing whatever it takes to be successful. A very stylized drama, it also explores the demonic uses of power in business, sex, and the inner world of fantasy and voyeurism where anything is possible, including interactive torture. 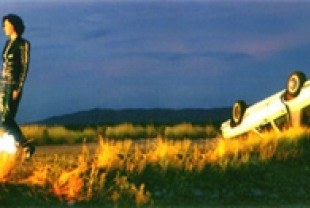