Directed by Clint Eastwood
A tense murder-mystery that finds director Clint Eastwood on familiar ground exploring themes of guilt and innocence, good and evil, and anger and revenge.

After writing their names in a slice of freshly laid cement in their working-class neighborhood, eleven-year olds Sean Devine, Jimmy Markham, and Dave Boyle are caught by two men who claim to be policemen. Dave is ordered into their car so they can drive him home. After four days of sexual abuse, he escapes his captors, but his life is set on a wayward course forever.

Twenty-five years later, the three are no longer friends. Sean (Kevin Bacon) is a homicide detective experiencing personal problems with his pregnant wife who has walked out on him. Jimmy (Sean Penn) has spent some time in prison for robberies and is trying to live a normal life running a grocery store. He is married to his second wife, Annabeth (Laura Linney), and has three daughters. Dave (Tim Robbins) is married to Celeste (Marcia Gay Harden) and has a young son. He has trouble keeping jobs and struggles with a "dark side" emerging from his abduction.

The three men are thrust together again when Sean's oldest daughter Katie (Emmy Rossum), a nineteen-year old, is brutally murdered. Her body is found in a local park. The investigating officer is Sean who has a difficult time when Jimmy appears on the scene in a state of rage. Two of his best friends, appropriately called the Savage brothers (Adam Nelson, Robert Wahlberg), try unsuccessfully to break through a police barrier with him. While Sean and his partner, Whitey Powers (Laurence Fishburne), question Jimmy about Katie's last day, Jimmy theorizes that if he had been ordered into the car instead of Dave, everything in his life would have turned out differently. Part of his agony is feeling that something he did led to Katie's death. He decides to conduct his own investigation and to find the killer with the help of the Savage brothers.

Meanwhile, Dave and Celeste have not been able to talk to each other since he arrived home on the night of Katie's murder with blood on his hands and a knife gash in his stomach. He claims to have gotten in a fight with a mugger who attacked him and nearly killed him. But when there are no reports of the incident in the newspaper, Celeste grows fearful that Dave might not be telling the truth. Sean's investigation leads to Brendan Harris (Thomas Guiry), a young man who was deeply in love with Katie and planning to run away with her to Vegas. But he and his partner have different theories on who the murderer really is and the tension builds as new details involving the crime keep emerging.

Clint Eastwood (Blood Work) directs this tense adaptation of Dennis Lehane's best-selling novel by screenwriter Brian Helgeland. Sean Penn and Tim Robbins give tour de force performances. This is a visceral drama about the threads that hold our lives together; when one is pulled, everything can begin to unravel. Eastwood, of course, is right at home on familiar turf with the movie's exploration of good and evil, guilt and innocence, justice and personal revenge.

The DVD Deluxe Edition is a 3 Disc Set. Disc 1 contains the film and audio commentary by Tim Robbins and Kevin Bacon. Disc 2 includes theatrical trailers, a tour of the book and movie's Boston neighborhood setting, a making of documentary, and Charlie Rose's interview with Clint Eastwood,Tim Robbins, and Kevin Bacon. Disc 3 is the film soundtrack, composed by Clint Eastwood. 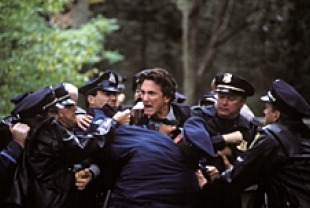 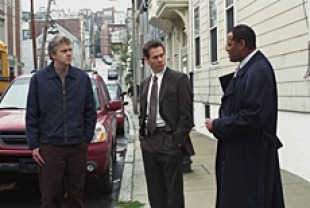