Directed by Liz Garbus
A riveting documentary about two young offenders serving time in a Baltimore juvenile facility and their struggles over a three-year period to forge a new life for themselves against formidable odds.

The popular phrase "Out of sight, out of mind" expresses the indifference of most Americans toward young offenders serving time in juvenile facilities. Lock 'em up and keep them off the streets is the familiar cry.

Liz Garbus made The Farm: Angola, USA in 1998, a riveting documentary about six men in a Louisiana penitentiary; it was nominated for an Academy Award. This time around, she focuses her attention on two young women in Waxter Juvenile Facility near Baltimore, Maryland. The number of girls incarcerated for violent crimes is on the rise.

Shanae was raped by five teenagers when she was eleven and then was arrested and convicted for stabbing a friend to death with a knife when she was twelve. Megan grew up without the love and support of her mother who was in prison for drugs and prostitution. This confused young girl ran away from ten foster homes and wound up attacking another girl with a box-cutter. Garbus follows Shanae and Megan over a three-year period as they move through the juvenile system, struggle with mixed feelings toward their mothers, comment on the efforts of the staff to set them on the straight and narrow, and try to cope with the changes in their lives.

At first, Shanae shows no remorse over killing another human being, but gradually she takes a hard look at what she did and is sorry. She is a very smart girl who rejoices when given a chance to move on to another facility and then return home to her father and mother. It is a sign of her resiliency that she manages to handle a tragedy that would have unsettled more wobbly teenagers. Shanae also does well in school finishing fourth in her class.

Megan flounders around for a while and is eventually sent to another foster home, which doesn't work out. She is briefly reunited with her mother but cannot forgive her for not being there when she needed her most. Inside, she is desperately frightened of becoming just like her. Life on the streets in a community where drugs are readily available offers her plenty of opportunities to repeat the same mistakes. Her anger keeps her going.

Girlhood gives us a glimpse into the lives of two troubled young women who desperately try to forge a new life for themselves against formidable odds.

The DVD has an interesting commentary by Liz Barbus, whose filmogarphy is also provided. 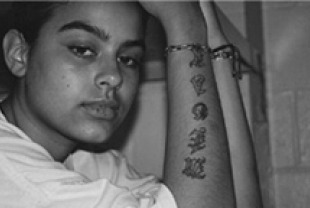