Directed by Billy Ray
A highly charged moral drama about the lies and fabrications of an ambitious young staff writer for the New Republic.

In his book The Varnished Truth, David Nyberg states: "Deception is not easy to talk about frankly. Many people tend to see it as either dubious and therefore an unfit topic for conversation, or completely obvious as 'the lubricant' that keeps society going and therefore unworthy of discussion. I think our difficulty in talking frankly about it stems partly from our own tacit understanding that to do so would often place us at a disadvantage; after all, in what cases would it be wise to tell the truth about the role of deception in your life?"

American society is rampant with deception from cigarette advertising to corporations and individuals evading taxes, politicians breaking campaign promises, used car dealers turning back odometers, and countless other minor and major violations of the truth. This mesmerizing drama, written and directed by Billy Ray (screenwriter for Hart's War and Volcano), is based on Buzz Bissinger's 1998 Vanity Fair article. It recounts the rise and fall of a young and ambitious New Republic staff writer who committed journalistic fraud and was exposed. Journalism is an arena where truth-telling is cherished and deception is looked upon with derision.

Stephen Glass (Hayden Christensen) is a 24-year-old writer who takes great pride in working for the New Republic because it is read by policymakers in Washington, D.C. He plays to people's needs in the office and is always the first to complement others. The desire to be liked is a very strong motif in the life of this overachiever. He admits to his co-worker and chief confidant Caitlin (Chloe Sevigny) that his parents disapprove of his career choice and still expect him attend law school. Glass follows their orders and takes some courses. He feels very close to Michael Kelly (Hank Azaria), the editor of the magazine, who stands by him when he makes an error in one of his articles.

In staff meetings, Glass charms everyone with his innovative story ideas and his penchant for discovering far-out and entertaining angles. No one ever likes to speak after him. This go-getter also finds time to do freelance articles for Harper's, George, and Rolling Stone. However, Glass crosses the line with a piece called "Hack Heaven" about a teen computer hacker who won some big money and other concessions from a large company he savaged. The story is found to be "cooked" — made up. Adam Pennenberg (Steve Zahn), a reporter for the on-line publication Forbes Digital Tool discovers that nothing about the story is true except the mention of the state of Nevada.

Glass tries desperately to defend himself to Chuck Lane (Peter Sarsgaard), the editor who replaces Kelly and has always been jealous of his young rival's creativity and prolific output. But more of Glass's lies are exposed — 27 of the 41 articles he wrote from 1995 to 1998 were either partial or total fabrications.

Writer and director Billy Ray does a commendable job exposing the deceptions of this driven man. He offers some hints as to what animated Glass to violate the basic code of truth-telling through an imaginary visit of the character to his high school alma mater to speak to students about a career in journalism. 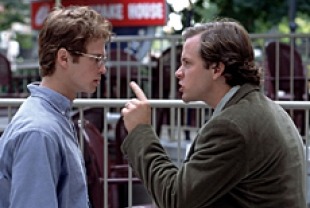