Directed by Bernardo Bertolucci
Explores the twilight realm of longing where three youth embark on a voyage of discovery.

One of the primal urges of youth is to cross the bridge from loneliness to intimacy. This universal desire is vividly brought to life in this engaging film directed by Bernardo Bertolucci. The screenplay is by English author and film critic Gilbert Adair based on his 1988 novel The Holy Innocents. The drama is set in Paris at the end of the 1960s, a time of great restlessness among youth, who were anxious for change in their private and public lives. In his twenty-second film, Bertolucci is on firm ground exploring the longings that propel us into fresh experiences.

Matthew (Michael Pitt) is a young and lonely American living in a hotel and savoring the sights and sounds of Paris in 1968. This film buff finds himself in the midst of a crowd demonstrating against the sacking of Henri Langlois, the head of the Cinematheque Francaise. He is mesmerized by Isabelle (Eva Green), who has dramatically chained herself to the gate in front of the building. She introduces him to her nonidentical twin brother, Theo (Louis Garrel), and after gallivanting around together, they invite him to the family apartment the next day to meet their English mother (Anna Chancellor) and French father (Robin Renucci), a poet. Matthew, who is quite reserved, is taken aback by the vehemence of Theo's argument with his dad about politics. But all that vanishes when the twins invite him to move in with them while their parents are away on holiday.

Matthew takes Isabelle out on a date but she is obsessed with her brother who has another woman in their room. She freaks out and later builds a tent in the sitting room where they all sleep together. One night their parents sneak into the apartment and are appalled at what they see. Isabelle' response to this visit leads to a radical act on her part. The three youth are released from their idyll when a rock smashes through a window. The students and others are fighting the police on the streets outside.

The Dreamers enters our consciousness to the insistent rock beat of music by Janis Joplin, the Doors, and Jimi Hendrix. Even more appealing are the many references to films. In one scene, the three youth run through the Louvre in homage to the race in Godard's Bande a Part (1964). The two men debate the talents of Buster Keaton and Charlie Chaplin. And in one of the most exotic scenes, Isabelle imitates Greta Garbo in Queen Christina caressing the furniture while remembering a special night of love. Longing is such a wonderful thing and in this Bertolucci film, it is expressed in the restlessness of youth who inhabit a twilight zone conducive to their uninhibited voyage of discovery.

DVD Special features include an audio commentary with director Bernardo Bertolucci, writer Gilbert Adair Writer, and producer Jeremy Thomas. Other features include a documentary on the making of the film, and a spot about the historical events of May 1968. 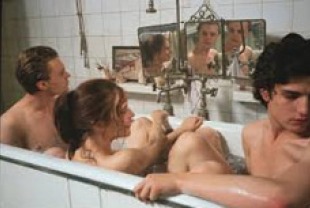