Barbershop 2: Back in Business

Directed by Kevin Rodney Sullivan
Both entertaining and edifying with its portrait of the challenges facing many urban neighborhoods across the country.

Calvin's (Ice Cube) barbershop has become an institution on Chicago's South Side after years of serving the black community. But a threat to its existence looms on the horizon. Quentin Leroux (Harry Lennix), a shrewd and aggressive developer, has decided to open a successful haircutting franchise, Nappy Cutz, directly across the street. When Calvin sneaks a peek inside he is stunned to see a fancy emporium replete with titanium clippers, vibrating chairs, aquariums, video screens, leather smocks, and a recreation area with a basketball court. He decides that it's time to make some changes at his place.

But his employees are not happy campers: Eddie (Cedric the Entertainer), the fast-talking elder, has plenty of comments on these changes; white homey Isaac (Troy Garity) feels he is not being treated with respect, especially in light of all of his loyal customers; Terri (Eve) is trying to tone down her anger and baffling everyone in the process; and they all have trouble tolerating the self-absorption of Calvin's cousin Kenard (Kenan Thompson), who has just graduated from barber school. Meanwhile, ex-con Ricky (Michael Ealy) has secretly nursed some feelings for Terri while hotshot Jimmy (Sean Patrick Thomas) has left the barbershop and become an aide to Alderman Brown (Robert Wisdom).

Barbershop 2: Back in Business is directed by Kevin Rodney Sullivan with Ice Cube as executive producer. The screenplay by Don D. Scott has many funny moments including a square off between Gina (Queen Latifah), who works at a salon next door to Calvin's place, and Eddie who has a way of irritating even youngsters with his sarcasm. Although there are flashbacks to Eddie's colorful past, the real emphasis is upon the ethical decisions Calvin must make when Alderman Brown and Leroux offer him a sweet piece of change to speak out in favor of their business-improvement plan that will bring condos and national franchises to the neighborhood. In deciding what to do, this serious young man visits Miss Emma (Jackie Taylor) who raised him. She tells him why Jesus wept and it provides a key to his speech before the city council.

Barbershop 2: Back in Business is both entertaining and edifying with its portrait of the challenges facing many urban neighborhoods across the country. 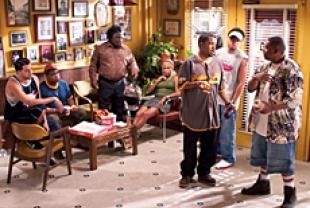