The Passion of the Christ

Directed by Mel Gibson
A raw, unflinching, and compelling personal testimony by Mel Gibson about the meaning of the suffering and death of Jesus of Nazareth.

"Whoever feels attracted to Jesus cannot adequately explain why. He must be prepared to be always correcting his image of Jesus for he will never exhaust what there is to know. Jesus is full of surprises."
— Adolf Holl

For 2000 years, the teachings, deeds, and personality of Jesus of Nazareth have exerted a hold on the imagination of humankind. Artists have made him the subject of countless drawings, paintings, murals, and sculptures. He has turned up as a major or minor character in all genres of literature from scholarly treatises to novels and Broadway musicals. The Passion of the Christ directed by Mel Gibson is the most recent in a long history of films based on his life and work.

These artistic images of Jesus present an astonishing variety of understandings of the man from Nazareth. He has been depicted as a teacher, healer, savior, judge, Jewish Messiah, revolutionary, ascetic, prophet, superstar, and clown. Given the complexity of the subject matter, there is little reason to believe that any one interpretation will ever be accepted as the definitive portrait.

Although controversy surrounded the 1977 television broadcast of Franco Zeffirelli's miniseries Jesus of Nazareth and even more clamor erupted over Martin Scorsese's 1988 movie The Last Temptation of Christ, they were tempests in a teapot compared to the pre-release raging debates over Mel Gibson's film. Since the director announced that he was going to focus exclusively on the suffering and death of Jesus — known traditionally as the passion — using as his source material the gospel stories, which he believes are literally true, people have worried about both the focus and the impact of the planned film. Of particular concern is whether the depiction of the role of the Jewish authorities in Jesus' death will fuel anti-Semitism, as so many passion plays have done over the centuries.

Much has been written elsewhere over the last few months about these issues. Now that the film is in release, it is important that those expressing objections and fears see it and then talk about their reactions. Hopefully, this will be teaching moment for religious communities gathering in an atmosphere of mutual respect.

Mel Gibson is a very conservative Catholic who believes that the church went off the track with the changes instituted by the Second Vatican Counsel. He attends a congregation that still says the mass in Latin. His traditionalist slant comes through in many of the choices he and co-screenplay writer Benedict Fitzgerald have made for the film including the characters' use of Latin and Aramaic language with English subtitles. In addition to situations and dialogue taken from the Bible, Gibson has fabricated many incidents including some based on the visionary writings of Anne Catherine Emmerich, a nineteenth century stigmatic and mystic. He includes repeated references to the battle between God and Satan over the soul of Jesus; Satan is an androgynous being who taunts Jesus and shows up throughout the story as a shadowy figure in the crowds.

Gibson has also chosen to be extremely graphic in his depiction of Jesus' suffering. In the opening scene in the Garden of Gethsemane, he visibly shakes and has to steady himself against a tree as he experiences the agony of the impending betrayal. After his arrest, he is repeatedly beaten by the guards taking him to the Jewish council. Then he endures a lengthy scourging by sadistic Roman soldiers during which his skin is ripped from his body. Bleeding and exhausted, he is whipped some more as he carries his cross to Golgatha, where we hear his bones being crushed as nails are driven through his hands and feet. There is absolutely no relief from the violence. Gibson has said that he was turned off by other portraits of the passion that do not adequately convey how horrible Roman crucifixion was. "I wanted to show the humanity of Christ as well as the divine aspect," he has said. "It is a rendering that for me is as realistic and as close to possible to what I perceive the truth to be."

Many people will feel that this drama goes too far in its depiction of Jesus' suffering. Certainly it is not a film for young people or children. Even those who are accustomed to witnessing gore and mayhem in the movies — and on the evening news — will be shocked by the unrelenting cruelty and bloodshed on the screen. We had been prepared by what we had heard about the movie and went braced to endure it. We found ourselves both amazed and grateful that Jesus choose to suffer violence rather than to practice it! That decision is beautifully conveyed in the scene in the Garden when he admonishes his disciples not to fight for him and, in a moment of lingering tenderness, heals the ear of a wounded guard.

This is the third film that Mel Gibson has directed following The Man Without a Face (1983) and his Oscar-winning Braveheart (1995). He has wisely chosen Caleb Deschanel (The Black Stallion, The Natural) as the cinematographer for this complex drama. Some indelible images linger in our mind as a result of his artistry. Jim Caviezel comes across as a flinty Jesus who endures great pain with silence and many moments of great compassion. Monica Bellucci as Mary Magdalene and Hristo Jivkov as the disciple John reveal with every gesture their devotion to Jesus.

But the heart and soul of the film is the performance by Maia Morgenstern as Mary, the mother of Jesus. She has few words of dialogue. Instead she uses her body language and her eyes to convey her love, agony, and grief at seeing her beloved son in excruciating pain. Several flashbacks convey their intimate relationship. In one Jesus the carpenter playfully splashes her with water. In another Jesus is just a small boy; when he falls down she rushes to help him. This scene is juxtaposed with Jesus falling under the weight of his cross; our hearts leap when she rushes to help him. This is the strongest portrait of Mary we have seen in any Jesus film. She comes across as a woman of incredible courage and caring.

No matter what other beliefs we bring to the theater, we can all agree that Jesus is an innocent victim here. The most compelling message of this movie is that in his name, we are obligated to extend our compassion to victims everywhere.

What's clear to us upon seeing the film is that The Passion of the Christ is a consistent and very well constructed statement of the director's beliefs. Some early reviewers have complained that the storyline does not provide enough context for the events of Jesus' final hours. Why was he such a threat to the Jewish and Roman authorities? How could the crowd turn against him? What did he teach and what did he stand for? But although those details might seem necessary for good movie plot development, in this case they are beside the point.

What Gibson has done is create a personal testimony. His Jesus is fulfilling a prophecy set out in the opening frame of the film ("He was wounded for our transgressions"); Jesus has chosen to give his life out of love for his friends; he is by his suffering making all things new. If his death is grotesque and heart-rending, it makes the sacrifice all the more significant. Gibson has carefully chosen fragments of Jesus' teachings to underline this point, including the familiar words about "my body and my blood given for you" from the Last Supper.

Theologians call this understanding of Jesus' death and mission "atonement theology." It is not the only way that Christians understand the cross, as Marcus Borg points out in his recent book The Heart of Christianity, but it is the one Gibson obviously believes. It is the reason why Christian fundamentalists and evangelicals have embraced the film so enthusiastically, even distributing a brochure with the provocative statement "Dying was his reason for living."

Yet even progressive Christians who see Jesus' death as the consequence of the stands he took during his ministry, particularly his challenges to the religious and political domination systems of his time, will find themselves deeply moved by his passion in this film. Our hearts go out to him. Our hearts break open as we witness his terrible suffering. No matter what other beliefs we bring to the theater, we can all — Christian (progressive, liberal, evangelical, fundamentalist), Jew, Muslim, Buddhist, Hindu, Native American, spiritual independent, or other — agree that Jesus is an innocent victim here. The most compelling message of this unflinching, powerful, and haunting movie is that in his name, we are obligated to extend our compassion to victims everywhere.

We hope especially that evangelical and progressive Christians will go through this experience together. While we may disagree on many theological points, we share a reverence for Jesus and the way of the cross that he undertook with such love and selflessness.

To conclude our coverage of The Passion of the Christ, we offer a devotional response to the film as a modern-day Stations of the Cross. As we move through the steps of Jesus' journey from Gethsemane to Golgatha, we encourage you to ponder the manifold ways in which the Crucified One is in our midst and still suffering and dying today. We hope especially that evangelical and progressive Christians will experience this meditation together. Click here to begin . . . 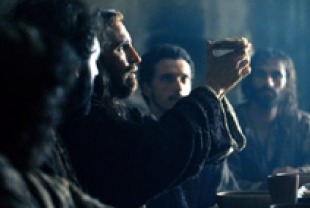 Meditating on The Passion of Christ

Stations of the Cross Meditation based on The Passion of Christ