Harry Potter and The Prisoner of Azkaban

Directed by Alfonso Cuaron
A convincing exploration of the essential challenges of adolescence when one is tossed and turned by doubts about self and others and exhilarated by fantastic energy and derring do.

Harry (Daniel Radcliffe) at thirteen years of age is a bit of a rebel and that energy is drawn out by the constant humiliations he endures while living with his Muggle relatives, the Dursleys. When his Aunt Marge (Pam Ferris) puts down Harry's dead parents with some especially cruel comments, he can't help but unleash some magic upon her. As she blows up like a balloon and floats away, Harry runs away rather than suffer the family's wrath. He is picked up by a purple, triple-decker Knight Bus that takes him to the Leaky Cauldron pub for a meeting with the Minister of Magic, who reprimands him only slightly for using his talents in the non-magic world. Soon Harry is happily back for his third year at Hogwarts. He is reunited with Hermione (Emma Watson), who is well on her way to becoming the brightest witch of all time, and Ron Weasley (Rupert Grint), who still has a propensity for getting himself in tough scrapes.

Everyone at the school is concerned about the news that Sirius Black (Gary Oldman), a very dangerous wizard, has escaped from Azkaban prison. Dragon-like flying creatures called Dementors have been sent to protect Hogwarts from this fugitive, but they are terribly frightening to the students and paralyzing to Harry. The lowdown on Black is that he conspired with Lord Voldemort in the death of Harry's beloved parents, and now is coming for Harry. The talented young wizard vows to take on this dastardly character. But before his can accomplish this mission, Harry must learn some more tricks of the trade from Professor Lupin (David Thewlis), the new Defense Against the Dark Arts teacher.

The challenge is to become familiar with one's fears and not to let them take over in times of trouble. Lupin teaches the students how to transform their worst nightmares and then expel them by seeing the humor in them. This clever tactic proves to be a winning combination for Harry who is carrying a heavy load of dark memories.

Another new teacher is Professor Sybil Trelawney (Emma Thompson), the very near-sighted expert on divination. Everyone seems impressed with her except Hermione who has mysteriously found a way to take more classes than anyone else in the school. The giant Hagrid (Robbie Coltrane) has been promoted and is now the Care of Magical Creatures professor. He introduces the students to Hippogriff, a strange and powerful flying creature that is a combination of an eagle and a horse. He must be approached with quiet dignity and calm; after Harry bows in respect, Hippogriff takes him on a joyous ride over the school and the countryside. But later Harry will need to find a way to save this incredible animal's life after he is sentenced to die for injuring Harry's nemesis, Malfoy (Tom Felton).

Harry Potter and the Prisoner of Azkaban is directed by Alfonso Cuaron, who was at the helm of the wonderful screen translation of A Little Princess. The screenplay by Steve Kloves necessarily has to leave out many incidents from the third installment of J.K. Rowling's series, but the story still manages to keep our imaginations totally engaged as Harry tries to come to terms with his powers, the past, and his parents' legacy. Another theme is the challenges the young friends face as they try to discern who is a good and a true teacher and who is not. Harry also comes to see that he can learn from anything. This film turns out to be a convincing exploration of the essential challenges of adolescence when one is tossed and turned by doubts about self and others and exhilarated by fantastic energy and derring do. 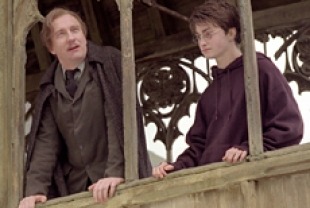 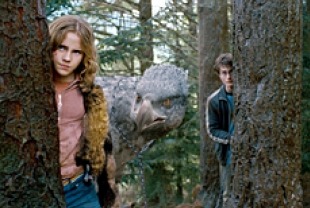