Directed by Michael Moore
This illuminating documentary shows how the Bush Administration served the interests of the haves and the have-mores with unjust domestic polices and a terrible war.

Michael Moore hopes this documentary will help convince millions of Americans that President George W. Bush and his closest advisors have taken ordinary citizens on a dangerous ride while increasing their own power and padding their own pocketbooks. Unlike the ridiculously phony approaches of some television and radio stations that claim to be objective, Moore is up-front about where he's coming from. He calls this film an "op-ed." And he also says it's a comedy. But the issues he covers and their ramifications for American life are deadly serious.

One of Moore's premises is that the Bush administration has been much less than forthcoming about why and how they have favored special interests in the "winning class" (people with money and power). Certainly this is the point of the interview with Craig Unger (House of Bush, House of Saud) in which he discusses the longstanding cordial ties between the Bush family and members of the Saudi elite. Moore wonders why many Saudis were allowed to fly home shortly after 9/11, considering that so many of the hijackers were from their country. Could it have something to do with Saudi investments in President Bush's former oil companies or the fact that Saudi interests own 6 - 7 percent of America with investments totaling $860 billion? Moore cleverly uses a clip from the TV show Dragnet to point out that the first thing detectives usually do when looking for a murderer is question the family. Yet members of Osama Bin Laden's family were never interviewed before they were allowed to leave the country. Moore shows planes taking off to the sound of the Animals' song "We Gotta Get Out of This Place." The filmmaker also finds it odd that he is questioned by the Secret Service when he is conducting an interview opposite the gigantic Saudi Embassy in Washington.

Moore next turns to the money to be made after 9/11. He traces the long association of the Bush family to the Carlyle Group, a military arms firm with which the senior George Bush is still associated. The war in Afghanistan may have been sold as a way to get Al-Qaeda, but one outcome has been a natural gas pipeline through the countryside benefiting American companies. At a trade show, representatives of energy and other concerns learn about all the money to be made in Iraq.

It's funny to see the heads of Bush Administration officials superimposed over the opening credits of the TV series Bonanza with George W. as Pa Cartwright and Dick Cheney, Don Rumsfeld, and Tony Blair rounding out the family. But it is not funny to see what their Wild West policies have wrought in Iraq. Moore shows the burnt bodies of Iraqi women and children and goes to an American hospital where servicemen lament the wounds they have received. It has always been the case that the poorest citizens, those who have few opportunities for employment other than the military, are the ones who bear the heaviest burdens in wars. Moore presents interviews with disillusioned soldiers in Iraq and one African American at home who vows not to return to kill "poor people." In another well-done scene, the filmmaker tries to get several members of Congress to sign up their sons and daughters to fight for the American cause in Iraq; only one member of Congress currently has a child in Iraq. Moore returns to his hometown of Flint, Michigan, and zeroes in on the grief of a patriotic mother whose son has been killed in Iraq. She reads his last letter in which he declared the war meaningless.

Fahrenheit 9/11 lacks the imaginative energy and prophetic insight into American culture that was on display in Moore's Academy Award-winning documentary Bowling for Columbine. There is little new information here for those who have looked into the spate of books about the Bush administration, followed the proceedings of the 9/11 Commission, or regularly read articles at CommonDreams.org. Some of the footage is obviously meant as a corrective to public perceptions. For example, many people hold onto an image of the President leaping into action on the morning of 9/11, launching the war on terrorism that he is now making the centerpiece of his re-election campaign. But Moore includes video of the President sitting in a Florida elementary school classroom where the children are reading "My Pet Goat" for a good seven minutes after being informed by his chief of staff of the attack on the second tower. "What was he thinking," Moore wonders in a voiceover as the camera closes in on Bush's glazed eyes. Why isn't he acting like the commander-in-chief is the question that crosses our minds.

Moore wants this muckraking film to wake up citizens who have been lulled into complacency by the media or beaten down over the years by the powerful interests aligned behind the administration. In one scene, President Bush addresses a crowd of his wealthy supporters. "This is an impressive crowd," he says. "The haves . . . and the have-mores. Some people call you the elite; I call you my base." It's not a huge "ah-ha!" moment, not one to change a whole lot of minds, but it is a kind of truth nonetheless.

Fahrenheit 9/11 shows how the Bush Administration and its policies have served the interests of the haves and the have-mores with unjust domestic policies and a terrible and tragic war. Moore is to be commended for offering another perspective on recent events and, on the whole, his op-ed comedy is deeply troubling.

The DVD is packed with extras, including a featurette on the release of the film and a short film of Lila Lipscomb's comments at the Washington D. C. premiere about her son's death in Iraq. New scenes include a montage of photos of the people of Iraq on the eve of the invasion; footage shot outside Abu Ghraib prison on the day of a prisoner release; an eyewitness account from Samara, Iraq; and a feature on homeland security, Miami style. Another segment showcases Arab-American comedians performing after 9/11; their acts are very funny but also raise profound questions about the racial profiling of Arab-Americans by airlines and the general atmosphere of distrust of their neighbors in some communities. Two segments cover the Bush administration's recent activities: Condoleezza Rice's testy testimony to the 9/11 Commission and President Bush's comments at a Rose Garden press conversation about the "conversation" he had just had with the Commission. 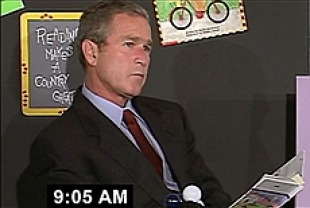 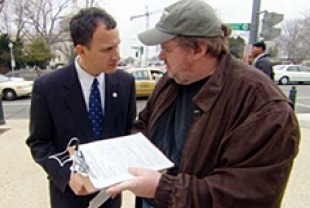