The Door in the Floor

Directed by Tod Williams
A mature treatment of sexuality, loss, and the emotional education of a young man.

Ted Cole (Jeff Bridges) is a famous author of children's books who is past his prime and wiling away the time at his East Hampton house. He is in the midst of separating from his beautiful wife Marion (Kim Basinger), who alternates between staying at the house with their four-year old daughter Ruth (Elle Fanning) and residing at a room in a town nearby. To perk up his spirits, Ted hires Eddie O'Hare (Jon Foster), a young man from his alma mater, Exeter, who wants to become a writer. Having lost his driver's license, the author needs someone to drive him around. He is spending a lot of time with Eleanor Vaughan (Mimi Rogers) on the pretext that he is sketching her in the nude. Her gardener Louis (Eduardo Gomez) doesn't like him very much.

Although Ted always tells admirers that he is just a writer of entertainment for children, Eddie is convinced that he is much more and he can learn many things from him. These high expectations are dashed when his new employer reveals that they will play things by ear during the summer. Ted shocks the callow youth by undressing in front of him and continuing their conversation while he's taking a shower in the open air. As a writer's assistant, Eddie thinks he'll help with revisions on Ted's latest work, but all he actually does is type and retype a few misplaced punctuation marks. When Ted finally gets around to a critique of a piece that Eddie wrote, he doesn't exactly give him a shining recommendation or encourage him to continue in the craft.

With nothing much to do, this young man pursues a popular teenage pastime: masturbation. When Marion walks in one day when he is using her clothes laid out on the bed to arouse himself, he's ashamed, but she handles the discovery as a compliment. She invites him out to dinner and comments on how serious he is. She inquires why he hasn't asked Alice (Bijou Phillips), the nanny who takes care of Ruth, out for a date. He replies that she isn't his type. Marion gets the picture and takes him by surprise with an offer of sex with her. They don't talk very much since she is still mourning the tragic loss of her two teenage sons in a terrible accident a few years earlier. Eddie realizes that the wall between Ted and Marion is built out of grief. Even worse, it has made a natural loving relationship with Ruth near impossible. Eddie is not old enough to understand the immensities of feelings in Marion's loss but he is glad to have been given the miracle of her body and their many evenings of sex together.

Writer and director Tod Williams has adapted John Irving's 1999 novel A Widow for One Year — actually the first third of that story — for the screen with remarkable fidelity to its ample themes and spirit. Jeff Bridges puts in an Academy Award caliber performance as the quirky, self-absorbed, and creative Ted. Kim Basinger gives an subtle and touching performance as Marion, conveying through her soulful looks and sparse words a wide range of emotions.

The metaphor of "the door in the floor," the title of one of Ted's children's books, also refers to the sense of loss that has swallowed their marriage. In Kitchen Table Wisdom, Rachel Naomi Remen has written: "The way we deal with loss shapes our capacity to be present to life more than anything else. The way we protect ourselves from loss may be the way in which we distance ourselves from life." It is fascinating to see how Ted and Marion have tried to cope with the loss of their two sons. Their strategies make it near impossible for them to be intimate with each other anymore. The person most affected by this is Ruth, who at the tender age of four seems to have been psychologically damaged by the haunting presence of her two brothers. She was born after their deaths, but they are enshrined in a series of photographs lining a long hallway of the house. Not a day passes that she doesn't study them.

The emotional education that Eddie receives in his affair with Marion and in his encounter with the selfishness and creativity of Ted is one that will serve him well if he ever becomes a writer. The screenplay contains plenty of nuggets of wisdom about this arcane and difficult craft. Ted tells him repeatedly that it is very important to always describe in detail what is going on in a scene: what one sees, smells, hears, and feels. This gift is revealed again and again in the Williams' screenplay — these characters and their yearnings come alive through the details that illuminate their actions and behaviors. The Door in the Floor is one of the best films of the year and along with The Cider House Rules stands as another successful screen adaptation of a John Irving novel. 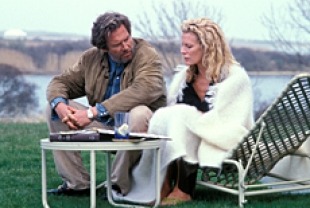 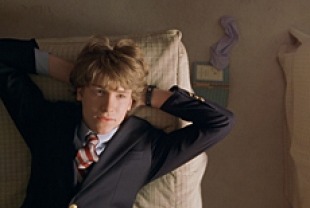