Fairy tales such as Cinderella, Snow White, Sleeping Beauty, and Jack in the Beanstalk help us to see that it is important to wrestle with our feelings of self-worth, fear, helplessness, and justice. The mere words of "once upon a time" offer us access to a realm where strangeness is as important as reason.

Edward Scissorhands is a modern fairy tale directed by Tim Burton (Ed Wood, Sleepy Hollow, Big Fish) and written by Caroline Thompson. Although there are no fairies or witches in this fantasy, the hero is a deformed outsider whose innocence and gentle nature make him a freak in the eyes of the community he visits.

Edward Scissorhands (Johnny Depp) has been created by a reclusive inventor (Vincent Price) who lives high above town in a chilly castle. Before the old scientist can replace the scissors he has substituted for Edward's hands with the real thing, he dies. For a while, Edward live on alone in the castle. The ageless youth is rescued from this isolated existence by Peg (Dianne West), the local Avon lady, who brings him into her suburban home and immediately tries to treat the scars on his face caused by his cumbersome metal hands. Although Edward finds it difficult to sleep on a waterbed, eat, or dress, Peg's husband (Alan Arkin) and son (Robert Oliveri) are intrigued by the eagerness of this heavy-handed outsider. The bored housewives in the community are awed when Edward demonstrates marvelous creativity in sculpting fantastic objects out of suburban hedges including a bear, a dinosaur, a ballerina, a penguin, and even Elvis! He also cuts hair and fashions unusual ice sculpture. Edward's innocence is revealed when he spurs the sexual advances of a promiscuous suburbanite (Kathy Baker). His unalloyed love of Peg's daughter Kim (Winona Ryder) earns the ire of her jealous boyfriend (Anthony Michael Hall). Eventually both the creativity and the gentleness of Edward Scissorhands become offensive to the community. After making him into a celebrity, the town finds a reason to turn against him in hatred. Only Kim keeps the secret of his fate.

Child psychologist Bruno Bettelhem has written: "Every fairy tale is a magic mirror which reflects aspects of our inner world." That is certainly true of Edward Scissorhands. 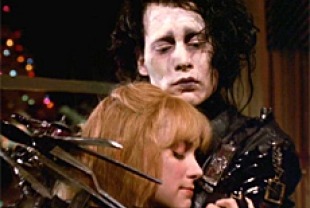