Directed by Danny Huston
Encourages us to turn our attentions to the art of healing, the choices involved in personal ethics, and the little virtues of life.

Thornton Wilder (1897-1975) was an American novelist and playwright who won three Pulitzer Prizes. His best works — The Bridge of San Luis Rey (1927), Our Town (1938), and The Skin of Our Teeth — examine the ethical dimensions of human existence. As he once wrote: "We learn the nature of life not by speculations but by fulfilling our immediate duties."

Wilder's 1973 novel Theophilus North, set in Newport during the 1920s, was semi-autobiographical in flavor. John Huston, Janet Roach, and James Costigan have fashioned a fine screenplay from this novel about a smart and sensitive young man who finds fulfillment in freeing others from unhappiness.

Wanting to experience "an immersion in life," Theophilus North (Anthony Edwards) leaves behind his career in Newport, Rhode Island, in 1926. This Yale graduate settles down at the YMCA. He is befriended by Henry (Harry Dean Stanton), a butler, who then introduces him to Amelia Cranston (Lauren Bacall) who runs a boarding house for servants.

Mr. North gets a job reading books to Mr. Bosworth (Robert Mitchum), a tycoon with an interest in philosophy. Elderly and feeble, he has been confined to his home by his domineering daughter (Tammy Grimes) and his physician, Dr. McPherson (David Warner), who is conspiring with her. Mr. North advises Bosworth that his minor physical ailments can be overcome. For this liberating advice, Mr. North earns the respect of Persis (Anjelica Huston), the old man's granddaughter.

Mr. North also helps a maid (Virginia Madsen) see that she must pursue the aristocratic lover she gave up in deference to class differences. Having amused Newport's children with his ability to conduct large jolts of static electricity, this unusual man cures Elspeth (Mary Stuart Masterson), a teenager, of her migraine headaches by touching her forehead.

Soon the community's sick and infirm are seeking him out. Dr. McPherson, who has already been displaced by this young man at the Bosworth mansion, will have none of this. He has Mr. North arrested for practicing medicine without a license.

The protagonist's sensitivity to the needs of others, his charm, intelligence, and disdain for that which the world deems valuable enables him to emerge unscathed from the trap set by Dr. McPherson. Bosworth bestows on Mr. North the dream of a lifetime, and Persis shows her gratitude as well.

A comedy of manners, Mr. North, directed by Danny Huston, follows this good man as he moves with ease in the worlds of both the very rich and the less fortunate servant class. The story encourages us to turn our attentions to the art of healing, the choices involved in personal ethics, and the little virtues of life. 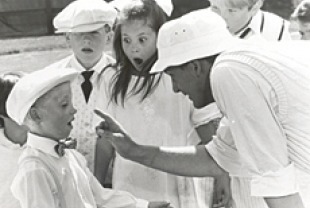