Directed by Walter Hill
Revels in the discoveries of youth and the gritty and cathartic magic of Mississippi Delta blues music.

Eugene (Ralph Macchio of The Karate Kid) is a Long Island musical prodigy studying classical guitar at Julliard. However, his real love is blues — especially the work of legendary Robert Johnson, who recorded twenty-nine selections of his music during the mid-1930s before dying. Eugene believes the rumor that there is a thirtieth song, and he springs Willie Brown (Joe Seneca of Silverado) from a New York nursing home to help him find it. This crusty old man is none other than “Blind Dog Fulton,” one of the best blues harmonica players in the country and a compatriot of Robert Johnson.

Eugene’s money gets them to Memphis, but from there they have to hitch to Brown’s home in Fulton’s Point, Mississippi. On the road they are joined by Frances (Jami Gertz of Quicksilver), a tough-talking seventeen-year-old runaway. Life on the road includes encounters with a sleazy motel owner, some corrupt black cops, and a band of rowdy rednecks, Eugene quickly learns about the low-down life of a bluesman, and his education is enhanced by Frances’s departure after a one-night stand with him. Brown observes: “Blues ain’t nothin’ but a good man feeling bad.” Eugene’s guitar wails.

Walter Hill directs Crossroads with a keen appreciation for its coming-of-age theme and for the gritty and cathartic magic of Mississippi Delta blues music. John Fusco’s screenplay contains a religious motif whereby Brown and Eugene wind up at “the crossroads” where years ago Willie sold his soul to the devil in return for fame and fortune. Now it is time to pay the man, and Eugene volunteers to face one of Satan’s sidemen in a juke-joint guitar duel. In this scene, as in most of the other moving moments in Crossroads, the outstanding music by Ry Cooder steals the film. It is, by turns, down-home, feisty, and ecstatically exuberant. 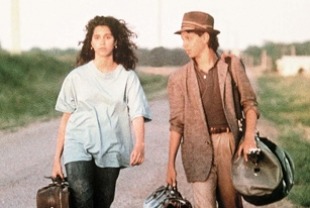