Directed by Lucrecia Martel
Explores the difficulties adolescent girls and older men have in dealing with the most powerful energy source in the world: their own sexuality.

In La Cienaga, her striking debut film, Lucrecia Martel charted the breakdowns and fissures in two middle-class Argentinian families during a hot and humid summer. This film takes place in the same town. Helena (Mercedes Moran) and her brother Freddy (Alejandro Urdapilleta) own and manage an old hotel. Some ear, nose, and throat specialists are again using the place for their convention. Dr. Jeno (Carlo Belloso), a married man with children, is attending by himself. One afternoon, while watching a musical performance, he presses himself sexually against a young girl who is standing in front of him. Amalia (Maria Alche), the teenager, is startled and turned on by the experience. She is Helena's daughter.

Amalia and her best friend Josefina (Julieta Zylberberg) are taking a course at the local Catholic church about faith and vocation. Although many of the other girls in the class are not at all interested in the art of spiritual discernment and finding out how to tell when God is speaking to you, Amalia is. She decides that God has called her on a mission to save Dr. Jeno from sin. She becomes quite obsessed with him, following him here and there. He, on the other hand, takes an interest in Helena and upon learning that she has background in acting, convinces her to play a role in a skit to be presented at the end of the convention. The doctor who was originally scheduled to handle this task left after his extracurricular sexual activities were discovered.

Writer and director Martel has created a totally engrossing drama about the powerful role sexuality plays in our lives and the disturbing ways that energy can be squandered or treated as evil. A much more spiritual approach is suggested by Eknath Easwaran in The Bhagavad Gita for Daily Living where he writes: "Harness the raw energy of sexual desire and help transform it, little by little, into an abiding flow of joy. . . if you feel strong sexual drives, congratulations. If you feel haunted by sex day and night, you are rich in resources. It's like striking oil in your own backyard: you have a little Arabia to supply you with all the power that you need."

Sadly enough, the characters in The Holy Girl do not know what to do with the rich energy resources they possess. Martel vividly conveys the pain, confusion, and blame that come with religious repression and a Puritanical inability to deal honestly with the strong sexual drives of the young and the challenges facing those in committed relationships. This film will no doubt make many viewers squirm uncomfortably but it is worth experiencing as a shadow exploration of the most powerful energy source in the world. 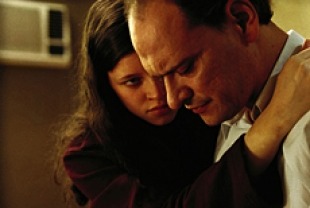