Directed by John Deery
A thoughtful drama about challenges faced by reform-minded Catholics who want to see priests given the option of marrying.

In a recent article, Michael Hout and Andrew Greeley report that in six countries (Spain, Ireland, the United States, Italy, Poland, and the Philippines), reform-minded Catholic laity want to see the Church become a more pluralistic and democratic institution. This could be achieved by giving autonomy to local bishops, returning to the practice of electing local bishops, appointing lay advisers, ordaining women, and allowing priests to marry. Irish Catholics are especially vehement about lay advisors and married priests.

Conspiracy of Silence, set in modern-day Ireland deals with the controversy within Catholicism about all the problems stemming from celibacy. Over 100,000 priests have left the church in the past 25 years and, as the recent sexual abuse scandals have shown, many priests are deeply tormented by stifling their homosexual and heterosexual urges. This bold film by John Deery looks at this knotty problem that just will not go away.

In the opening scene, Father Frank Sweeney (Patrick Lynch) is forcibly removed from a Special General Council Meeting in the Vatican after he holds up a banner saying "The Church Has AIDS." He is protesting what he sees as the hierarchy's avoidance of priests with HIV. Three years later, Daniel McLaughlin (Jonathan Forges), a charismatic and intensely devotional seminarian, wins the accolades of his peers for his talents in the sport of hurling. When another classmate invites him to his room and makes a sexual overture, Daniel turns him down but is seen leaving the room by Father Doherty (Harry Towb), who reports this incident to the head of the seminary, Rector Cahill (Sean McGinley). This harsh disciplinarian assumes a sexual transgression has taken place and expels both young men. News of the incident spreads like wildfire through the small Irish community. Daniel claims his innocence but is forced to leave much to the dismay of his pious mother (Brenda Fricker). His father (Niall O'Brien) then losses a European grant to help his farm business since Rector Cahill sits on the grant board.

When Frank Sweeney commits suicide, David Foley (Jasson Barry), a journalist, decides to dig deeper in the story. Meanwhile Matthew Francis (John Lynch), the dead priest's lover, tells Father Dowling (Hugh Bonneville) that Sweeney was HIV positive. After speaking to Foley, Bishop Michael Quinn (Jim Norton) reads the article in the newspaper and is outraged by the criticism of the Catholic Church. He is determined to make things difficult for the reporter so no more stories follow. When Father Joseph Ennis (Hugh Quarshie) comes to give a lecture at the seminary, Daniel attends, but he is ordered by Rector Cahill to leave. Father Ennis encourages the seminarian to share what is on his mind, and he points out that he was unfairly dismissed. He and Father Dowling suggest that Daniel should fight for his re-instatement. Confused by all the pressure on him, the seminarian connects with his girlfriend, Sinead (Catherine Walker), and they make love.

Conspiracy of Silence won the Hartley-Merrill International Screen Writing Award for John Deery. This is not a Catholic bashing film; instead it brings to the fore some of the hidden tensions and problems ensuing from the practice of celibacy. The writer/director does side with reformers and makes it quite clear that traditionalists are willing to use their power to ward off any changes in ecclesiastical policy. Certainly the moral integrity and ardent faith of Father Dowling and Father Ennis is evident; and the desire that Daniel has to be both a priest and to marry Sinead is heartfelt. What the story does not even bring up is the large number of Catholic priests who have become Anglicans, where clergy are allowed to marry.

The rousing finale to Daniel's dilemma comes in a live TV debate in Dublin with the seminarian, the reporter, the Bishop, and his communications aide all speak their minds. Conspiracy of Silence presents some of the formidable challenges faced by reform-minded Catholics who dare to question the tradition of celibacy.

DVD features include production notes and a photo gallery. 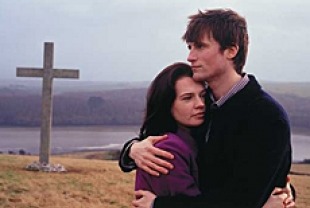