Directed by Thomas Carter
An inspirational film about a high school coach who has the gall to suggest that athletes must make their mark in the classroom as well as on the basketball court.

Ken Carter (Samuel L. Jackson) is running a store when he decides to take on a new challenge for a meager salary: coaching the Richmond High Oliers, a ragtag basketball team that has been losing for years. The year is 1998, and on the school's walls are some of the records he set as a star athlete there. Carter is a rigid and principled man who believes he can make a difference in the lives of the mostly poor African-Americans on the team. He demands that everyone use the term "sir" as a sign of respect, that the players sign a contract to maintain a minimum grade average, attend all classes, sit in the front row, and wear a suit and tie on the day of each game. This rigorous disciplinarian hands out burdensome physical exercises to those who are late or break any of the onerous rules designed to make them physically and mentally fit for competition.

The team members really respond to their new coach's regimen. He inspires them to believe in themselves, and they go on a winning streak. All seems to be well until Carter discovers that the boys have not lived up to the contract in terms of their studies. Many of them are failing or not regularly attending classes. Much to the dismay of the teachers at Richmond High and the parents of the basketball players, he locks the gym and forces the players to catch up on their studies. This unprecedented act brings on the media. The parents rally against Carter believing that he has taken away the one arena where their sons can shine — on the basketball court. But the coach has a much higher vision for each of the players — a life that will not end with a string of victories on the basketball court. He knows that young people from their community are 80% more likely to end up in prison than anywhere else.

Samuel L. Jackson gives a rousing performance as Coach Carter, an intensely moral man whose charisma and principles make him a formidable force in the lives of these wayward adolescents. Thomas Carter (Save the Last Dance) directs from a screenplay by Mark Schwahn and John Gatins. He draws out fine and well-modulated performances from Rob Brown as an athlete who excels both on the court and in the classroom and from Robert Ri'chard as the coach's son who thinks his dad is a hero. This inspiring film stands alongside other sports flicks of note including Hoosiers, Remember the Titans and Friday Night Lights. 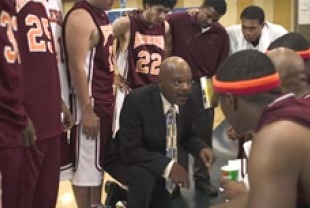