Directed by Len Morris, Robin Romano
Makes the point that we are all one family and the degradation and slavery of one child working in horrible conditions diminishes us all.

The International Labor Organization Convention 138, setting minimum standards for employment, has been signed by 135 nations. Convention 182, banning the worst forms of child labor, has been signed by 150 nations. Yet today, for 246 million children, life is nothing but work. This eye-opening documentary narrated by Meryl Streep, reveals the growing phenomenon of child labor with reports from eight countries — Brazil, India, Pakistan, Indonesia, Mexico, Nepal, and the United States. As Wangari Maathai, Kenyan environmentalist and 2004 Nobel Peace prize winner says in the film, "Misusing children as workers is a form of murder. It's a slow death, a sentence of death that you are giving to the child."

We hear the voices of these young victims and see them toiling away: a young slave carries rocks on her head every day in a quarry in Orissa, India; a 15-year-old runaway who is a child prostitute in Mexico City tells her story; a teenage boy shares his tribulation in a tale of fear and exhaustion while working on a fishing platform near Indonesia; and children do back-breaking agricultural work on tobacco farms and coffee plantations in Kenya where they are exposed to toxic pesticides. In the United States, children of migrant workers toil in the fields picking crops; they are forced to miss school, which is their only chance to improve their lives. In other parts of the world, little boys and girls are shown scavenging for food and things to sell in garbage dumps.

In Stolen Childhoods, producer and director Len Morris and co-director and cinematographer Robin Romano not only let these children speak for themselves but they offer a sampler of practical solutions that have been tried in various countries by individuals and groups. In India, Kailash Satyarthi has rescued thousands of children from rug-making operations where they were chained to looms. Pharis Harvey talks about RUGMARK Foundation which supplies products that are certified free of child labor. Brazil has come up with programs to address the problem, including an educational subsidy that pays poor families so their kids can go to school instead of doing grueling work in the fields.

U.S. Senator Tom Harkin (D-Iowa) calls the world's child labor factories "a breeding ground for Osama Bin Laden's army and future terrorists." Cristovam Buarque, a member of the Brazilian senate and former minister of education, has made a plea for a "Marshall Plan for children" modeled after the economic recovery program put into motion following World War II: "It would be so easy to have a local Marshall Plan, investing not only in the economy, but investing in social areas for the children of the world. This would be easy. The money exists. All that is needed is for the world to want to do it."

A spiritual perspective would help as well, one that would enable us see all the boys and girls chained to looms, on fishing platforms at sea, and sweating under the burning sun at rock quarries as being our children. Stolen Childhood makes the point that we are all one family and the degradation and slavery of one child anywhere diminishes us all. 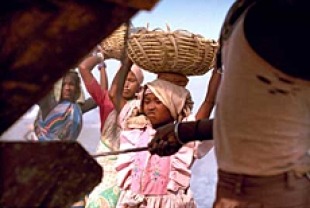 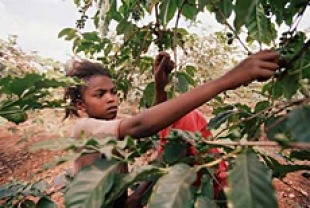