The Sisterhood of the Traveling Pants

Directed by Ken Kwapis
Friendship of four teenagers bonded together by mutual caring and a pair of jeans.

Four teenage girls have been best friends for years. They were told that they were even pals in the womb since their mothers were all together in a prenatal aerobics class. As youngsters they developed their own personalities and as they grew older, they bonded even more deeply so that the eccentricities of each blended into the oneness of their lasting friendship.

In this charming and relaxed film version of the bestselling novel by Ann Brashare, director Ken Kwapis (He Said, She Said) has fashioned a warm-hearted drama that ought to connect with all those who have found friendship to be one of the delights and miracles of life. The screenplay is by Delia Ephron (Michael, You've Got Mail) and Elizabeth Chandler (A Little Princess). Commenting on the pants that serve as the tie that binds these four high school friends together during a summer of separate adventures, Brashare has observed: "I've always liked the idea that clothing can hold emotions and memories or connections to other people, so it wasn't a stretch to imagine a pain of jeans could be the physical repository for a living friendship." Now there's a spiritual reading that makes sense to us and serves as a fitting start to our review.

On the day before they are to head off for their summer vacations, Carmen (America Ferrera), Lena (Alexis Bledel), Bridget (Blake Lively) and Tibby (Amber Tamblyn) stop in a thrift store. For a lark, they try on a pair of jeans and find out, much to their amazement, that they fit perfectly on each of them. Extremely happy, the girls sneak into the room where their mothers took a birthing class together and create a ritual for the pants. They create a list of ten rules including you must never wash the pants, you must never say or think you are fat while wearing the pants, you must never pick your nose while wearing the pants, and you must never let a boy take off the pants. They agree to write to each other during the summer and to pass the pants along from one to another over the coming months.

Lena, a very shy teenager who is frightened of the opposite sex, heads off to Greece to stay with her grandparents whom she has never met. After riding a donkey to a glorious house at the top of a small town, she is left breathless by the beauty of the place surrounded by a turquoise sea. While making some sketches in her journal, she accidentally falls into the sea and is rescued by Kostas (Michael Rady), a handsome Greek youth who attends the University of Athens and happens to speak English since he once lived in Chicago. This connection is made while wearing the lucky traveling pants. But plenty of challenges unfold after her grandmother tells her she cannot date the boy since the two families have been feuding for years. Can Lena break the chains that have kept her from expressing herself for years?

Back in town, Tibby has decided that the only way to entertain herself during a dull summer of working at a discount story and babysitting her little sister is to make a documentary about the quiet desperation of those whose lives are meaningless. But in the midst of this "Suckumentary," she meets Bailey (Jenna Boyd), a sassy and wise-beyond-her-years twelve year old who volunteers to be her assistant on the film. Turns out she has some interesting ideas about people to interview and ways to draw them out. Although not looking for another friend, Tibby finds herself in the presence of a person who opens her up emotionally and lets her see how anger has animated so much of her life.

Bridget is a blonde beauty who still hasn't come to terms with the recent death of her mother. At a soccer camp in Mexico, she stuns all the rest of the girls with her intensity on the field and her brazen attempt to win the affection of Eric (Mike Vogel), a coach who is off-limits. All of her energy goes into running and impressing everyone with her golden girl appearance. But in her intimate encounter with Eric, she discovers that there is an emptiness inside her that must be dealt with and not escaped from.

Carmen eagerly looks forward to spending some prime time with her father Al (Bradley Whitford), who has not seen her very often since he divorced her mother years ago. But when she arrives at his new suburban home, she is stunned to find out that he is living with Lydia (Nancy Travis), a divorcee with two teenagers, and much of the summer will be consumed with making plans for their upcoming wedding. When her expectations of really getting to know her father are dashed, Carmen tries to hold back her hurt but explodes at the idea of being treated like an outsider.

Friendships are deeply enriched by rituals experienced together and even more by shared stories. We've been down this path before in many films about female friendships (Now and Then, Mystic Pizza, The Baby-Sitter's Club). This one does a fine job in presenting the glue that holds these four together even though they are miles apart.

DVD features include a documentary about the film, an audio commentary track, and interviews with the cast and crew. 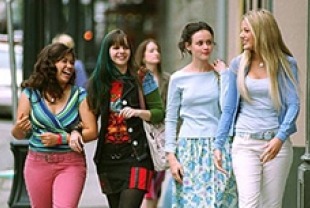