Balzac and the Little Chinese Seamstress

Directed by Dai Sijie
A light-hearted, playful love story set in China with a tribute to the soul-stirring powers of French literature.

Novels have the power to introduce us to new worlds, to take us on inner journeys, and to stir within us our deepest yearnings for freedom and the delights of the open road. In this marvelous French and Chinese production, writer and director Dai Sijie journeys back to the years of 1971-1974 when two bourgeoisie young men from the city have been ordered to attend a Maoist re-education camp run by peasants in the mountains. The drama, based on the filmmaker's autobiographical novel, pays tribute to the power of fiction to change a person's life with its imaginative depiction of other people's lives. Dai Sijie has also fashioned a tender love story filled with magical moments and large dollops of humor and playfulness. One could compare it to the same spirit that was present in Amelie.

Luo (Ku Chen) is a handsome 18 year old whose father, a dentist, has been labeled as a traitor for once giving a filling to Chiang Kai-shek, a lover of capitalism. When the illiterate chief (Tianlu Chen) who runs the camp comes across a cookbook of Luo's and learns that it has a recipe for chicken, he throws it in the fire and says that he must adapt to a simpler diet. Ma (Ye Liu) is a violinist. When his instrument is discovered, the peasants pass it around in a circle, thinking it a toy.

When the Party Chief learns that the violin is for making music, he orders Ma to play something. He plays Mozart and tells him the piece is called "Mozart is thinking of Chairman Mao." Luo and Ma are smart enough to know what is demanded of them in this repressive setting. But they are determined to have a little fun while they are there.

The labor is onerous in the camp, and the two young men struggle carrying heavy loads on their backs and crouching in the mines doing hard physical labor. When they hear that the local girls bathe under a waterfall, they go to take a gander and see that the prettiest one among them is the Little Seamstress (Xun Zhou). She works with Old Tailor (Zhijun Chung) and has an avid curiosity. When Luo discovers that she cannot read or write, he vows to lead her out of the world of ignorance. How on earth can he accomplish this? Four-Eyes (Hongwei Wang), another young man in the re-education program, has a trunk with banned books (including works by Balzac, Gogol, Flaubert, Kipling, and Dostoevsky). Luo and Ma steal them and set up a secret reading abode in a cave. The Little Seamstress is most enchanted by the novels of Balzac.

Meanwhile, the two young men are given a special assignment by the Village Chief to see North Korean and Albanian movies, and then retell their stories to entertain and educate the peasants. Luo faces a challenge when he comes down with malaria and is forced to suffer the healing customs of the area which include dunking in freezing water and being beaten on the back with sticks. But perhaps his defining moment comes when the chief pleads to him for help with a painful tooth. Luo comes up with some clever ways to solve this problem, and proves that he learned a little bit from his father about dentistry.

Balzac and the Little Chinese Seamstress charts the love that blooms between Luo and the tailor's granddaughter. When changes take place that separate them, Ma looks after her and finds himself feeling the same way as his best friend. The coda of the film set 20 years later finds Luo and Ma as reunited middle-agers fondly recalling their three years together and their mutual enchantment with the Little Chinese Seamstress. The region where they lived and worked is set to be covered by the waters created by a large dam on the Yangtse River. It is a fitting metaphor for the way time steals the past from us and pulls us reluctantly into the future. This bittersweet finale perfectly fits the gentle and tender events that have unfolded in the marvelous story. 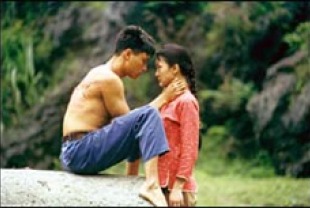 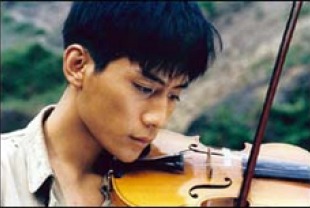