Timothy Treadwell loved grizzly bears and saw himself as their champion. For 13 summers, beginning in 1990, he visited the Alaskan wilderness and lived among them. Treadwell put his experiences on 100 hours of self-shot footage. But in 2003, his luck and good fortune among these wild animals ran out when he and his girlfriend (a reluctant visitor to the area) were clawed to death and eaten by a grizzly. Werner Herzog, the famous German filmmaker, has created a mesmerizing documentary around Treadwell's life and death, using much of his subject's own footage.

Treadwell dropped out of college, developed an addiction to drugs, moved to California, changed his name, and lost out to Woody Harrelson in an audition for the role of Woody on the TV series Cheers. This failure as an actor sent him to the Alaskan wilderness where he found a home and something he could do and be proud of doing. Treadwell discovered that the grizzly bears came down from the mountains in the summer to catch salmon in the Katmai National Park and Preserve. He set up camp which he called "the Grizzly Maze" and filmed many sequences of them playing and, in one very scary scene, fighting viciously with each other.

Treadwell gave these wild animals names like Mr. Chocolate and Sgt. Brown. He presented programs at schools and saw his mission as protecting the bears from those he believed had no appreciation of them, such as hunters, poachers, and park service employees. Treadwell never carried a weapon of any kind and was seen by local naturalists and park service officials as "crossing the line" with his patronizing and naïve view of these animals.

Herzog praises Treadwell as a filmmaker, and there are many incredible images of grizzlies, foxes, and the bear lover's many mood swings. This documentary does compel us to consider what happens when a human refuses to respect the wildness of animals as the Other, full of mystery and their own hungers and drives. Certainly Treadwell, an outcast from society, needed the grizzly bears more than they needed him.

The DVD contains the featurette "Making of In the Edges: The GRIZZLY MAN Music Session" and production interviews with director Werner Hertzog. 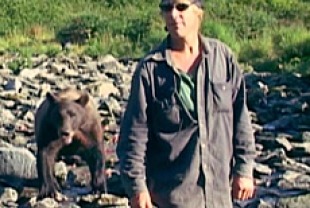 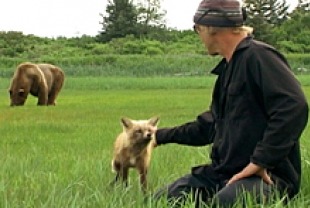