Directed by Fernando Meirelles
A gripping thriller that exposes the shadowy parameters of a war against the poor and the powerless that is animated by corporate greed and political amorality.

Many of John le Carre's novels have given compelling behind-the-scenes glimpses of the labyrinthine dramas of the Cold War and the terrible things spies did in the service of their country. In this suspenseful screen adaptation of his novel of the same name, directed by Fernando Meirelles from a script by Jeffrey Caine, the time is now and the subject is the malfeasance of international pharmaceutical companies and government bureaucracies. Using the same fast and frantic camerawork that made City of God into such a cult film, the director makes this thriller into something akin to a docu-drama. He draws out top-drawer performances from a brilliant and diverse cast of actors.

The film stands head and shoulders above the typical action dramas that these days have become little more than elaborate chase and crash sequences. Here the quest takes us into the consideration of soul and the moral quagmire that arises when money and power take precedence over the value of human life. And right in sync with the global trends of this era, The Constant Gardener depicts the gap between the rich and the poor and the lengths to which the mighty will go to cover up their rampaging corruption and ethical rot.

Tessa Quayle (Rachel Weisz), a human rights activist and wife of English diplomat Justin (Ralph Fiennes), has been found brutally murdered in Kenya along with her driver. Rumors abound in the diplomatic community that she was having an affair with Arnold Bluhm (Hubert Kounde), a black physician who had accompanied her to another part of the country and is still missing.

Tessa and Justin were always an odd couple: he a mild-mannered diplomat who loves spending his free time in his garden and she a beautiful, sexy woman with a yearning to make a difference in a world shot through with oppression and exploitation of the poor. After Tessa and Justin's newborn baby dies, she becomes obsessed with some sick African women being treated at the same hospital. She discovers they have been taking a drug called Dypraxa,that is being tested on the poor as an antidote to TB. Tessa and Arnold suspect that the trials are being fixed and related deaths are being covered up.

Justin knows nothing about her investigation until after her death. But instead of setting it aside and getting on with his own life, he decides he must know more about Tessa's crusade. This decision proves to be quite unsettling to Sandy Woodrow (Danny Huston), acting Head of the High Commission and Foreign Office bigwig Sir Bernard Pellegrin (Bill Nighy). They put Tim Donohue (Donald Sunmpter), a spy, on his trail just to make sure that he does not go public with any of the details of the English and Kenyan government's cooperation with the international pharmaceutical company that is testing Dypraxa.

Justin's quest to find Tessa's murderers takes him on a complicated journey fraught with mystery and danger. He meets with Ham (Richard McCabe), his wife's cousin in England, and receives some help from a young computer wizard that tracks down critical information on the Internet. In Germany, Justin is beaten viciously and realizes that this conspiracy has so many players that it will more difficult than he thought to get to the bottom of it. After returning to Kenya, the diplomat keeps discovering more information about the circles of deceit surrounding Dypraxa. In a telling scene, he has traveled to a remote village where food is being distributed to starving Africans. A marauding force of vicious men on horseback gallop through the place killing men, women, and children with wild abandon. The point is made that the poor are constantly the victims of violence, whether their oppressors are global corporations or murderous bands of tribesmen. They are viewed as worthless commodities by their own country's leaders and by the other governments who have no qualms about making a profit on their suffering, especially if it means jobs and political capital at home. The Constant Gardener is a watershed work that exposes the shadowy parameters of a new war that is animated by corporate greed and political amorality.

DVD features include deleted scenes, extended scene Haruma Play in Kibera, featurette "Embracing Africa: Filming in Kenya," John Le Carre: "From Page to the Screen", and "Anatomy of a Global Thriller: Behind the Scenes of The Constant Gardener." 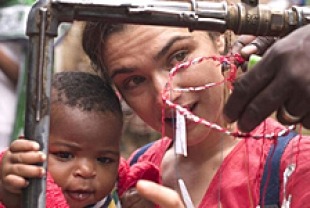 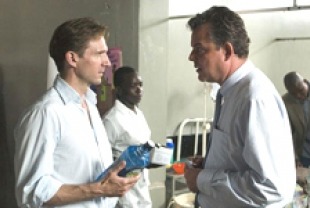 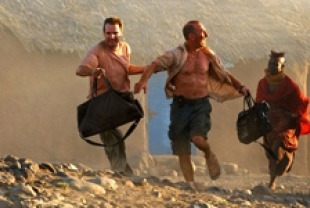