Opting Out of the Blame Game

Three exercises to help you move from the tendency to blame others when things go wrong to taking responsibility and seeing mistakes as a natural part of life.

Something goes wrong, and we immediately try to figure out who we can blame. This happens in both our personal lives and our community life.

A tremendous amount of energy is expended every day on the blame game. You leave home late and on the road get stuck behind a stalled car. Arriving at your meeting, you blame the driver of that vehicle for your tardiness. You have a report due, but a colleague calls with a question, and you postpone your work. When your boss asks why the report isn't done, you tell her that an interruption threw you off schedule.

Public discourse is much more likely to focus on who is at fault for problems than on what positive things can be done to rectify them. Watching the news, we hear public officials sidestep taking responsibility for problems; instead, they blame the messenger — the press — for bad news. After 9/11, Hurricane Katrina, and the meltdown of the financial systems, there were calls for commissions to examine what happened. To the extent that these efforts find concrete suggestions for how responses can be improved, this is laudable. But they have to move beyond just naming names.

The habit of blaming inevitably leads to resentment, anger, and judgment. It also feeds the victim syndrome (not only are things someone else's fault, we are suffering because of them). A daughter is sure that if her mother had been more assertive, she would have better luck in her own relationships. A son tells his father that if he hadn't put so much pressure on him to succeed, he would have had a much happier life. Partners blame the other for any money problems. Doctors are blamed for not curing physical maladies. Social problems are the fault of the schools, the corporations, and the government. God is blamed for natural disasters.

Looking for the cause of our problems gives us a momentary feeling of righteousness. We are right, and others are wrong. There is nothing we need to do because the other party is at fault.

But is that really true? Spiritual teachers from all traditions have shown that there is another way to approach these situations and dilemmas. Take Jesus, for example. He knew what it was like to be unjustly attacked, yet he refused to play the blame game. When a woman was about to be stoned by her community for committing adultery, he asked those who were without sin to cast the first stone. In one of his most famous teachings, he suggested that we take the log out of our own eye before complaining about the spec in another's eye. Instead of emphasizing others' faults, Jesus emphasized their goodness. He was critical of those who tried to build themselves up by tearing others down.

With spiritual practice, we, too, can opt out of the blame game. Here are a few things to try.

• Sit down with a paper and pen and list the people you presently blame for some of the bad things that have happened to you. If you are like us, this exercise will probably surprise you. But by bringing awareness to this pattern, you can often stop it. Simply say to yourself, "Oh, I'm blaming again."

• Take one event where you blamed someone for causing you a hardship. Now trace back your responsibility in the event. We contribute mightily to every situation we find ourselves in. Examine the story you have told yourself about this event and see if you need to rewrite it. There may be a lesson in this experience for you.

• Bring compassion into all of your encounters. Realize that others, like yourself, make mistakes all the time. It may be necessary to call someone to account for what they have done, but even this can be done with compassion and kindness. Blame accentuates the failings of others, whereas compassion sees mistakes as a natural part of life and as things that can be corrected. 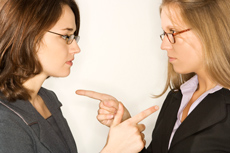