Birthday of Mary, the Mother of Jesus September 8

Readings, inspirational thoughts, and spiritual practices for the birthday of Mary, the Mother of Jesus.

Mary, the Mother of Jesus, has always occupied a special place in the hearts and devotional lives of Roman Catholics. Orthodox Christians also revere her, celebrating her birthday as one of the 12 "Great Feasts" of the Orthodox Church. Life magazine estimated that the prayer "Hail Mary" is said two billion times every day, and each year five to ten million people make a pilgrimage to Our Lady of Guadalupe in Mexico City; many others visit Marian sites elsewhere in the world. This saint is prayed to as advocate and helper, and even in the sports area there is a reference to her power: the last desperate pass by a losing football team is called a "Hail Mary."

In recent years, the surge of interest in women's roles in the church and to new attention to the Sacred Feminine has led many Protestants to a fresh and deeper appreciation of Mary. She is also venerated by Muslims. It is reported that when the Prophet Muhammad cleared the idols out of the Kaaba in Mecca, he allowed only a fresco of the Virgin Mary holding the Child Jesus to remain. In every Muslim mosque, the "mihrab" or prayer niche in the wall is dedicated to Mary. In the Qur'an, she is described as having been sent as "a mercy for the worlds."

It is very appropriate, then, in these times of great suffering and peril for humanity that we invoke Mary's nurturing presence and compassionate love.

In his book, Mary of Nazareth, Prophet of Peace, Father John Dear sees a three-part movement in her life that models a way to move through the violence and the storm clouds of war in our time.

In the image of the Annunciation, Mary surrenders herself to God and moves into solitude. In silence, she waits and listens for divine direction. Dear believes that in times of danger, we need to do the same — to give the Holy One our anger, violence, and vulnerability, and to disarm our hearts. He calls this Mary's stage of contemplative nonviolence.

In the story of the Visitation Mary responds to her own connection with God by reaching out to help Elizabeth. This, Dear writes, is the movement from contemplative nonviolence to active nonviolence. Mary teaches us to practice loving-kindness in our families and communities.

In the third stage of Mary's journey, her Magnificat emerges not just as a hymn of praise to God but also as "a manifesto of revolutionary nonviolence and a call not to arms, but to disarmament and justice." Dear points out that the Magnificat was banned in Argentina after the Mothers of the Disappeared in the country used it to call for nonviolent resistance to the ruling military junta in the mid-1970s.

Megan McKenna's book Mary: Shadow of Grace proclaims the mother of Jesus as an inspiration for our time and for all time. She writes:

"In the life of the church Mary becomes contemplative, mystic, the one who prays for wisdom and throws her cloak, her mantle of justice, over all those in need. There is a statue in Europe from the Middle Ages that shows Mary with her cloak opened wide. Inside, all crowded together, are people stacked on top of each other: nobles, kings, queens, and knights. But the ones closest to her heart and hands are the peasants, orphans, children, and the poor. And now, . . . who is she? . . . And so Mary is the woman butchered in Rwanda, the Muslim woman raped and brutalized and left pregnant by soldiers, the single mother on welfare, working at subsistence wages, raising her children without help from the church or community or her ex-husband. She is all the women, one third of the world's population always on the move, fleeing starvation, war, disasters of flood, earthquake, and drought. She is the woman who mourns the slaughter of the children, the executions of the state, the torture and disappearances of men and women. She is the shadow of the old ones battered or shunted aside, institutionalized or left on the streets to wander and scavenge for a living."

Mary's Vineyard by Andrew Harvey and Eryk Hanut is a beautifully designed collection of writings and illustrations of the mother of Jesus. Harvey says of her:

"All the powers of all the world's Mothers — Tara, Durga, Kali, of the Tao — are in Mary. She has Tara's sublime protectiveness towards all creation; Durga's (the Fortress's) inaccessible, silent face; the grandeur and terribleness of Kali; the infinite awareness of balance and mystery of the Tao. The miracle of Mary and the source of her extraordinary hold over the human heart, however, is that she was a human mother as well, a mother who endured every imaginable anguish and so shares all of our griefs with an intensity and an intimacy no purely Divine Mother can. In Mary, then, we have a complete image of the Divine Feminine, an image at once transcendent and immanent, other-worldly and this-worldly, mystical and practical." 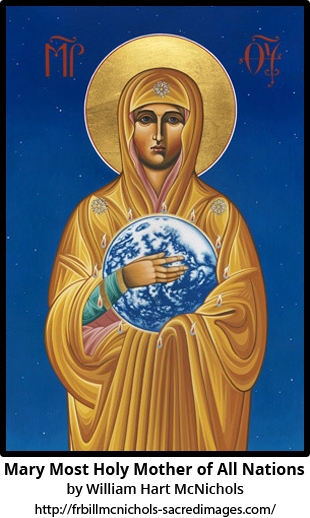