Connecting to the spiritual stamina, joy, and the pleasures of humble service of others modeled by St. Clare of Assisi.

Clare (1193 - 1253) was born into one of the wealthy families of Assisi in Italy. She loved fine things as a teenager but was also drawn inwardly to a life of service. At seventeen, she heard Francis of Assisi, the monk who repaired churches and ministered to the sick, speak and say: "When there is poverty with joy, there is inner peace." A year later, she decided to follow in his footsteps by giving up her life of wealth. Francis persuaded her to form a community of women at San Damiano. She spent the next four decades in prayer and contemplation. She was the first woman to write a Rule for religious life.

Adopting her words "My Lord, I thank you for having created me" as an sacred prayer of gratitude for the day.

Watch the film Clare of Assisi, a one-woman play written and performed by Karen Lee Hodgson that conveys the spiritual stamina, joy, humility and determination of this Christian saint.

Read The St. Clare Prayer Book: Listening for God's Leading and adopt one of her prayer practices.

Photo Credit: The icon of St. Clare used on this page is by Brother Robert Lentz, OFM. Reproductions can be obtained from Trinity Stores here. 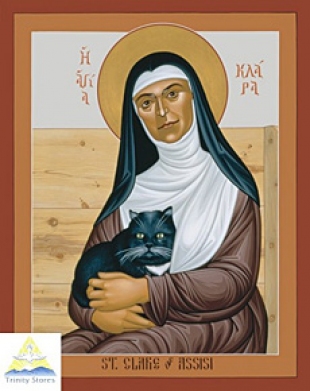