Birthday of Daniel Berrigan May 9

(PDP) Celebrating the extraordinary life and ministry of Daniel Berrigan who walked his talk as one of the foremost peace activists of our time.

Daniel Berrigan's life was punctuated with bold acts of nonviolent social action. Born in 1921, he grew up in an Irish Catholic family in Minnesota and joined a Jesuit seminary right out of high school. After he was ordained a priest, he traveled in France where he was influenced by the worker-priest movement. He returned to the United States and began teaching in colleges, including Le Moyne College in Syracuse, Cornell, and Yale. He also wrote poetry which became a way to express his growing concerns about American war-making.

During the Vietnam War, Berrigan was one of nine activists who burned draft registration records in Catonsville, Maryland, for which he was tried and sentenced to three years in prison. He refused to surrender himself and went underground for several months living with supporters and surfacing periodically at anti-war rallies. He eventually was apprehended and spent eighteen months in prison before his release in 1972.

Daniel and his brother Philip then organized the Plowshares Movement to protest the production of nuclear and other weapons. Their first action was at a General Electric plant in Pennsylvania, a nonviolent protest in which they hammered on nose cones and offered prayers for peace. Over the years Berrigan participated in many more demonstrations, including protesting the Gulf War, the U.S. invasion of Afghanistan, and the Iraq war.

Daniel continued to conduct retreats, to speak publicly, and to write until his death in 2016 just short of his 95th birthday. He authored more than 50 books of prose and poetry.

Put these quotations in your heart on Berrigan's birthday.

Check out his Living Spiritual Teachers' page for reviews and excerpts from 13 books by Daniel Berrigan.

Perhaps one of the most difficult spiritual practices socially conscious activists have to undertake is to "love your enemies." In this passage from Daniel Berrigan: Essential Writings, the peacemaker explores what this means. As you reflect upon his words, identify where you can apply them in your own life.

"Love your enemies? The Word of God in our midst? But we were at war. The moment the war was launched, we all became realists. The Word of God might apply elsewhere (or elsewhen) or to simpler times to one-to-one conflict or to pacifists and religious (whoever these latter might be; but for the most part they were mum as the others).

"Love your enemies — a strange command, when you think of it. It is like the text of a drama, written with a mysterious ink. When the play is staged, the text disappears. It is in a sense self-canceling. You can say it aloud, act it out and are struck by the tremendous, curt implication. The enemy disappears!

" 'Love' and then 'enemies.' The two cannot coexist. They are like fire and ice in the hand. The fire melts the ice, or the ice extinguishes the fire. The fire wins out (at least in the gospel text)! The verb 'love' transforms the noun 'enemies.' The enemy is reborn by the power of love. Astonishing. Now the enemy is a former enemy, and a present friend, brother, sister, lover even. Talk about rebirth!

"Love, you, the enemy, and lo, the enemy vanishes where he stood.

"Also it is not only the opponent who undergoes a dazzling transformation, but myself as well, who against all expectation has learned love in place of hatred, who had once been stuck in the same plight as my enemy. Together we made a frozen mirror image, awful, redundant, implacable. I was the enemy of my enemy. A sound definition of hell." 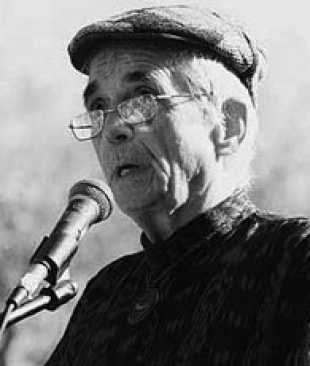