In the introduction to this volume in the Modern Spiritual Masters Series, peace activist John Dear describes Daniel Berrigan as a prize-winning poet, an acclaimed Broadway playwright, a best-selling memoirist, a theologian, a professor, a fugitive, an ex-con, Nobel Peace Prize nominee, and in the words of Amy Goodman of Democracy Now, "a national treasure." Berrigan's life has been shaped and immersed in nonviolent social action for peace. Born in 1921, he grew up in an Irish Catholic family in Minnesota and joined a Jesuit seminary right out of high school. After he was ordained a priest, he traveled to France where he was influenced by the worker-priest movement. He retuned to the United States and began teaching in various colleges. Berrigan also wrote poetry which became a way to express his growing concern about American war-making.

During the Vietnam War, he was one of the nine activists who burned draft registration records in Catonsville, Maryland, for which he was tried and sentenced to three years in prison. He went underground but was apprehended and spent 18 months in prison. Berrigan and his brother Philip then organized the Plowshares Movement to protest the production of nuclear and other weapons. Over the years, he has participated in many more demonstrations, including protesting the Gulf War, the U.S. invasion of Afghanistan, and the Iraq War. Berrigan is featured as one of our Living Spiritual Teachers; he has written more than 50 books of prose and poetry.

Editor John Dear (also one of our Living Spiritual Teachers) covers Berrigan's life in the introduction as a poet of peace, a prophet of peace, and a peacemaker at work in the belly of the American empire. He has made some incisive choices from Berrigan's books, journals, poems, essays. and homilies. Noviolence is at the heart of the Gospels and Jesus' life. That is why Berrigan could say at his 1981 trial for a Plowshares action:

Whether writing about Gandhi, the death of Vietnam protester Roger LaPorte, the assassination of Archbishop Oscar Romero, his experiences in a Washington, D.C., jail after his first arrest from participating in an anti-Vietnam War demonstration, the folly of a just war theory, the dire effect of all wars on the poor, life on the run as a fugitive from the FBI, the challenges of being a community of conscience, the soul of peacemaking, walking with Thich Nhat Hanh, or the many lessons to be learned from the prophets of old in the Bible; Berrigan's flinty faith shines through as he melds his zeal for peace and justice with his compassion and love for all people (even his enemies). Here is a passage where he describes his response to the idea of a just war:

"The 'just war theory' is in a fact a cruel oxymoron. War, no matter its provocation or justification, is of its essence and nature, supremely unjust. The injustice of war implies a blasphemous inflation of human authority, that humans are allowed to decree who shall live and who shall die, to dispose of human differences by disposing of humans. We are done with that theory forever."

Sadly enough we are not done with that theory for it was espoused by President Barack Obama during his Nobel Peace Prize speech. But as Berrigan has demonstrated by his courageous ethical actions and his prolific writings, we can stand up and say that we have had enough of the arrogance of the American empire and of Presidents who try to convince us that peace can be achieved through the weapons of war. It is time to love our enemies and give peace a chance to bloom. 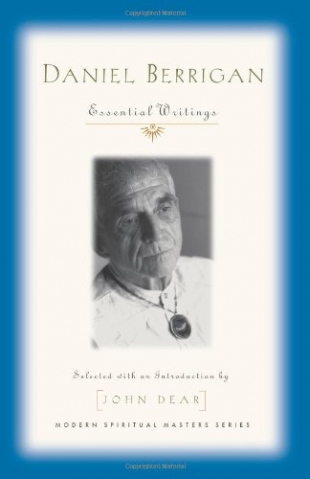