Celebrating the musician's birthday by reflecting on some of his ideas.

Even when he was 90 years old, Pablo Casals known as the world's greatest cellist, practiced this instrument for four or five hours every day. Someone asked him why at his age, he still worked so hard on the music, and he responded, "Because I think I am making some progress."

Pablo Casals was born on this day in 1876 and died in 1973. By the age of four, he was playing the piano and by six, he was composing songs with his father. Casals found inspiration in the natural world and in the music of Johann Sebastian Bach. His expressive style of playing the cello influenced many others. Throughout his life this virtuoso was an opponent of tyrannical governments including Francisco Franco's.

In celebration of this musical genius's birthday, ponder and take to heart one of these pithy quotations of his: 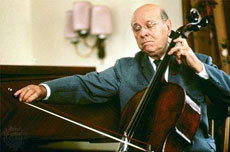