(PDP) Acknowledging the accomplishments and wisdom of the African-American agricultural researcher.

Born in a slave family in 1864, George Washington Carver became a teacher, scientist, and advocate for poor African-Americans. Trained as an agricultural chemist, he pioneered programs to improve crops in his native South. Through various projects, he demonstrated how fertility could be restored to the land by diversification, especially by planting peanuts and sweet potatoes. In 1941 Time magazine dubbed him a "black Leonardo," a reference to the white Italian polymath Leonardo da Vinci.

He taught at the Tuskegee Institute in Alabama, and died on this day in 1943 after a life of service to others. Like other black leaders who followed him, he calls us to refresh our ideas about freedom and the important role of education in achieving it.

George Washington Carver is buried at Tuskegee next to Booker T. Washington. His epitaph reads: "He could have added fortune to fame, but caring for neither, he found happiness and honor in being helpful to the world."

Reflect upon the wisdom of George Washington Carver: 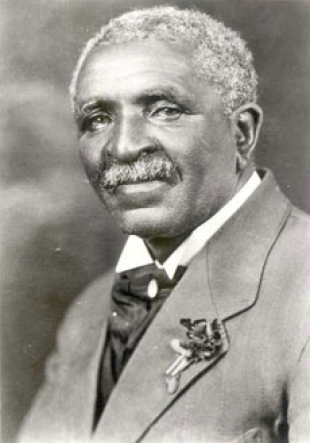