Feast Day of St. John of the Cross December 14

Honoring the life and work of the great Christian mystic and poet St. John of the Cross

On December 14, 1591, just before midnight, John of the Cross was dying. He wanted to make up his bed in case anyone would come to visit him. He asked to have "Song of Songs" read to him. While listening, he was heard to say, "So beautiful are the flowers!' And then he died.

Born in 1541, St. John of the Cross grew up in poverty and was drawn to the contemplative life. His soul longed for mystical union with God that his piety offended members of his order, including its head. The turning point of his life came in 1567 when he met Teresa of Avila, a kindred spirit who was looking for a partner in her Carmelite reform movement. She appointed him prior of the first community of discalced friars. Later, John of the Cross served as a spiritual director at her convent.

John wrote: "Contemplation is nothing else but a secret, peaceful, and loving infusion of God, which if admitted, will set the soul on fire with the Spirit of love." In 1577, he was imprisoned for nine months during which he wrote about his "dark night of the soul."

Watch John of the Cross, a 60-minute minute drama on his life and work directed
by K. C. Lynch.

Listen to the Sounds True audio The Way of Saint John of the Cross: A Guide Through the Dark Night of the Soul by Susan Muto, a five-hour spiritual reading of the mystical writings of this sixteenth century lover of God and healer of souls.

Ponder the deep meanings of "Beloved," a poem inspired by St. John of the Cross in Daniel Landinsky's Love Poems from God: Twelve Sacred Voices from the East and West.

God held
the earth as if it were His lover
and spoke with the most tender of feelings
to all in existence as He spoke
to me,

"Look, dear son, I have made a bride for you,
but she is shy; so how are you
to consummate?

I want all souls to consummate with me,
so I devised a plan:

and passionately run into
an embrace with
me,"

That blessed grace I now know.
I now see my Beloved
everywhere.

Use the following sayings from John of the Cross as catalysts for reflection: 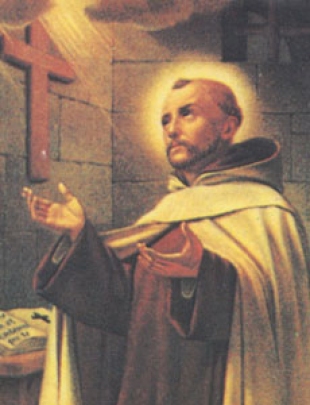