Birthday of Margaret Fuller May 23

(PDP) Celebrating the great reformer who argued against the subjugation of women and slaves.

Margaret Fuller began her remarkable life on May 23, 1810 in Cambridgeport, Massachusetts. Under the tutelage of her father, she received an education equal to her institutionally educated male peers and was as an adult recognized as the best read person — man or woman — in all of New England. She became a great reformer, critic, and journalist, applying transcendentalist ideas about the primacy of the soul to argue against the subjugation of women and slaves.

Fuller served as the first editor for Emerson’s transcendental journal The Dial, and in it she published what would later become Woman in the Nineteenth Century, the first major feminist work in the United States. Her social justice work included not only women’s rights but prison reform and emancipation.

Fuller’s ideas about gender equality maintain a freshness even now, their revolutionary cast little dimmed by the passage of time. In Woman in the Nineteenth Century, Fuller carefully avoided the trap of proving that women are equally human; rather, she assumed that, as souls, women were essentially the same as men, and presented the facts of their unjust oppression. Anticipating thinkers like Paulo Freire, Fuller acknowledged that this sexist system hurts men as well, who have used their power to construct limitations to their own potential.

Fuller’s writings are electric with the hope of a coming revolution. She saw all around her, in the female and male intellectuals and artists of the day, the realization not only of female equality but of the universal liberty enshrined in the U.S.’s founding documents: “It is inevitable that an external freedom, such as has been achieved for the nation, should be so also for every member of it.”

This revolutionary fervor led Fuller on her most daring assignment: covering the 1848 Italian revolutions for the New York Tribune. Though male peers like Emerson encouraged her to sail home to safety when the violence escalated, Fuller stayed close to the action and reported on the bloodshed and (short-lived) triumph. Unfortunately, her brilliant life came to an end shortly afterwards. Returning to New England, Fuller, her secret husband Giovanni Ossoli, and their child were shipwrecked just off of Fire Island, New York.

Embrace "a Golden Certainty": Fuller’s democratic resolve, her absolute belief that democracy would be realized for all in the United States, never wavered: "Though the national independence be blurred by the civility of individuals; though freedom and equality have been proclaimed only to leave room for a monstrous display of slave dealing and slave keeping; though the free American so often feels himself free, like the Roman, only to pamper his appetites and his indolence through the misery of his fellow beings, still it is not in vain, that the verbal statement has been made, ‘All men are born free and equal.’ There it stands, a golden certainty, wherewith to encourage the good, to shame the bad. … That, which has once been clearly conceived in the intelligence, must be acted out. It has become a law, irrevocable."

Take a few minutes and, on a small sheet of paper or in a note or email to yourself on your phone, write down your hope for democracy now. Try to match the confident and enthusiastic tone of Fuller’s phrase "a golden certainty."

Explore the "Great Radical Dualism": Fuller’s transcendental belief that the body is yet another form that distorts the pure soul led her to question what today we would call “binary gender norms,” and to celebrate women who felt authentic in men’s clothes. “Male and female represent the two sides of a great radical dualism,” she wrote. “But, in fact, they are perpetually passing into one another. Fluid hardens to solid, solid rushes to fluid. There is no wholly masculine man, no purely feminine woman.”

In your journal, write down three things about your gender identity that go beyond norms and reflect this fluidity of masculinity and femininity. What do you notice that surprises you?

Start a Conversation: Fuller created what she called Conversations, public opportunities for women to express themselves and develop independent thinking at a time when women’s official sphere of influence was limited to the home. The Conversations were modest steps towards progress, but looking back, we can see that they provided a strong foundation for the women’s movement in New England.

What groups today are marginalized and in need of the safety and empowerment of a Conversation? How can you help? To start, jot down one or two pressing social, political, spiritual, or philosophical issues, and then write a list of people to invite to discuss these issues together. 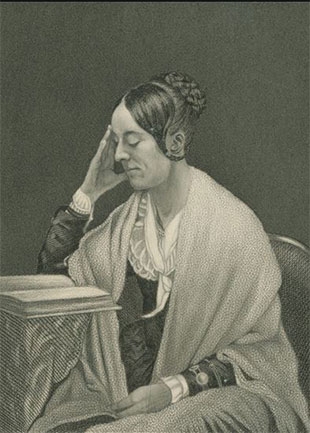