Reflecting on the Freedom Pledge

An opportunity to consider what it means to commit to upholding freedom.

In 1946, William Coblenz, a junior official at the U.S. Department of Justice, was exploring the National Archives in Washington, D.C. on his lunch break when he got the idea that all Americans should have the opportunity to see original copies of documents fundamental to U.S. democracy. In this period just after World War II, only a fraction of Americans could travel to the country's capital, and Coblenz started to envision bringing the documents to the people. He shared his idea with officials at the Archives, and the Freedom Train began to take shape. By 1947, the heads of Du Pont, General Electric, Paramount Pictures, Standard Oil, and U.S. Steel had gotten behind the project, and 52 railroads agreed to allow a train carrying archival documents to use their tracks.

Complete with its own maintenance crew and even a 24/7 Marine Corps guard made up of 24 enlisted men and three officers, the Freedom Train was ready to travel from Philadelphia, Pennsylvania, covering 37,160 miles and stopping in 326 cities before reaching its final destination in Washington, DC. It carried the original Magna Carta, George Washington's handwritten notes on the Constitution, a rough draft by Thomas Jefferson of the Declaration of Independence, Abraham Lincoln's Gettysburg Address and Emancipation Proclamation, a letter by Robert E. Lee accepting presidency of Washington College (later Washington and Lee University), the German and Japanese surrender documents from World War II, and much more — 126 items in all.

More than 3.5 million visitors viewed these documents on the Freedom Train. You can read about their experience in this excerpt from David Hackett Fischer's Liberty and Freedom and in this amply illustrated article in Google Arts & Culture.

People who walked through the Freedom Train were invited to sign this Freedom Pledge:

"I am an American. A free American.
Free to speak — without fear
Free to worship God in my own way
Free to stand for what I think right
Free to oppose what I think wrong
Free to choose those who govern my country
This heritage of freedom I pledge to uphold
For myself and all mankind."

Take some time to consider whether this pledge is meaningful to you as written. If it's not, modify the wording so that it reflects your values. For instance, you might want to change "all mankind" to "all people" to use more inclusive language. Or you may want to say "I have the right to be free to" before each phrase. To say "I have the right to be free to speak — without fear" and "I have the right to be free to oppose what I think wrong" would acknowledge that some groups in America's history up to the present time have not experienced these freedoms, such as African-Americans during slavery and Native Americans during the genocide of indigenous tribes. Some have had to act at great risk to their lives, such as civil rights marchers, antiwar protestors, or those opposed to immigration policies. If you are from another country, you can adjust the wording to fit your own nation's creed or what you wish your nation's creed could be.

When you've gotten the pledge to take a form that's true for you, consider writing or printing it out and signing it. You will be in the company of 3.5 million (and counting!) others. The original signatures were placed in the Library of Congress.

Note: In 1976, America's bicentennial, another Freedom Train traveled the country, visited by more than seven million Americans. You can read more about it here.

You might also enjoy this film footage of the original Freedom Train's visit to San Jose, California, in 1948. The accompanying song was written by Irving Berlin in a single afternoon. It's performed here by Johnny Mercer, Peggy Lee, Benny Goodman, Margaret Whiting, and the Pipers and the Weston Band.

Below is a meme with the original Freedom Pledge. One way to affirm it is to share it on social media (just right click to save the image to your desktop and then post to your social media accounts). You might include in your post:

I'm signing this Freedom Pledge. I invite you to do the same. Read more about the Freedom Train and Pledge here: SpiritualityandPractice.com/FreedomPledge #FreedomPledge 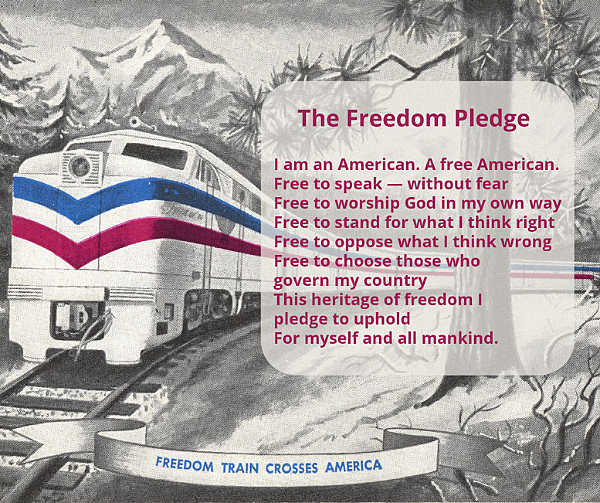 The Impact of the Freedom Train