Music for the Mindful Brain

By Jeffrey Thompson
A collection of six CDs of music and sounds to transform the mind and deepen meditation.

In the ancient cultures of India, Egypt, and Greece, music played a therapeutic role in the lives of people. It was created and performed with the intention of bringing about well-being and health. By the Middle Ages, the idea of music as entertainment took over. But down through the centuries, many industrious, stubborn and creative souls have kept alive the use of sound and music as medicine for the body, mind, and spirit.

Dr. Jeffrey Thompson began experimenting with sound and its effects on the body and brain in 1981. In 1988, he established the Center of Neuroacoustic Research where he discovered how sound frequency patterns built into musical soundtracks can entrain brainwaves and bring about various health benefits.

On Music for the Mindful Brain, Thompson presents musical and 3-D nature soundtracks designed to address brainwaves associated with various states of meditation. We liked "Theta Meditation" which has a calming and soothing effect on the mind. It serves as a stop-sign for those who are stressed out. We were inspired by "Gamma Meditation 2.0" and enchanted with "Meditation Ocean" and "Meditation Rainforest" with its nighttime performance of frogs, insects, and other creatures. 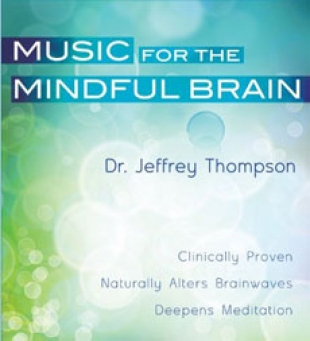