After September 11 New York and the World

By The Journalists of Reuters
A pondering through pictures of the aftershocks of this infamous day in history.

In this book, over fifty Reuters international experts and renowned photographers chart the events taking place during the year after September 11, 2001. The mourning continues along with new political and social developments that have intensified the uneasiness of many Americans.

In the first section titled "New York: An End to Innocence," Arthur Spiegelman and Patrick Rizzo present the rescue operations at Ground Zero along with the removal of the debris from the Twin Towers. There are many moving photographs including two sequences that stood out for us. The first shows the last steel beam of the Towers being lowered onto a flat-bed truck, covered with an American flag, and carried away by an honor guard during the ceremony on May 28, 2002, marking the completion of the recovery operation. The second series shows a flag-draped stretcher carried from the site during the same ceremony. It symbolized the victims whose bodies were never recovered. These rituals were two of many during the year that revealed how important it is for people to release their feelings through intentional acts.

The second section with an opening essay by Alan Eisner, "An Anxious Nation," captures in images the fear and feelings of vulnerability afoot in the country during the anthrax scares and the war against terrorism. The final section with an essay by Mark Trevelyan, "Shock Waves Reverberate Around the World," looks at the hot spots of tension in the Israeli-Palestinian conflict and the border disputes between India and Pakistan.

Six members of Reuters staff died on September 11, and two journalists were killed covering the subsequent war in Afganistan. A donation from every book sold will go to Reuters Foundation, Reuters humanitarian and educational trust. 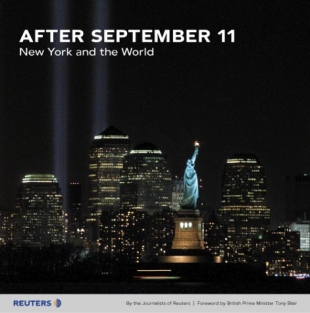