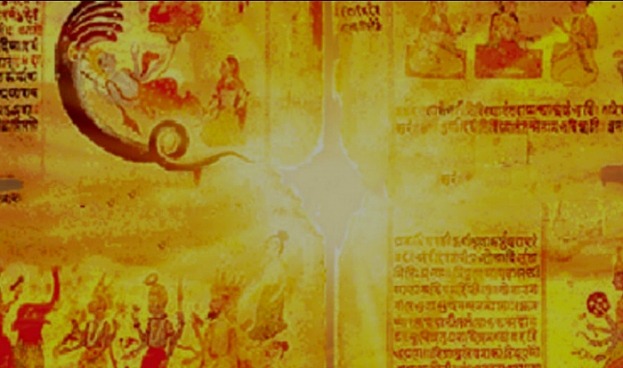 Evolving Gender Roles in the Vedas

By Nimai Agarwal for KidSpirit's The Soul of Gender Issue.

For those who don’t know, the Vedas are ancient Hindu scriptures, a vast collection of knowledge that stretches over many subjects, compiled in Sanskrit, one of the oldest languages known to humans.

From art, music, archery, martial arts, politics, religion — the Vedas have it all. They’re described as being a guide to the world.

I grew up in the Hindu tradition, and as I explored one of the most notable of Vedic literatures, the Bhagavatam, I saw a trend. Women lived in the shadow of men. They were chaste, faithful to their husbands, and docile. I would read about revered sages who instructed kings and could create palaces out of thin air. Their wives were usually just housekeepers who helped their husbands live comfortably. One can argue that their greatness came from their humility and chastity, but how come the men didn’t have to act similarly? It all seemed rather tilted in favor of men.

As a loyal egalitarian, Vedic ideas of gender roles shake my faith quite a bit. I’ve wondered, would I want to live in an ideal Vedic society if I were a woman? At first, I let these questions broil in the darkness. They were always there, but I ignored them, content in my state of spiritual stagnation. As I address these fears, however, I’ve started to understand my religion’s stance on gender roles better, and from that I’ve begun to accept the Vedic system for what it is.

Vedic society was complementarian, meaning the goal for different classes in society was to complement each other for a common good. People were divided into different roles, who were meant to work together and create harmony. The roles of men and women were also defined. Women were said by the Vedas to be mothers, and naturally caring; therefore they were expected to house-keep and raise their children, or generally assist their husbands in their endeavors. Men were supposed to support the family, and carry out their duty, based on their class. They were seen as naturally being protectors of society. The two were meant to work together, to achieve a perfect household which promoted spirituality.

The Vedic texts are full of references to gender. In several instances, women are described as being less intelligent, and grouped with lower castes. On the other hand, the scriptures describe all living beings as being intrinsically equal. I tried to iron out these apparent contradictions, but I couldn’t make sense of them. I would see gender roles presented in subtle ways. Women were shy, obedient to their husbands, and faithful, while men were individuals who could be scholars, cunning businessmen, or even rulers and warriors. Whenever I read about the Brahmanas (the teachers and priests), I always encountered men. The female Brahmanas would simply house-keep for their scholarly husband.

At the heart of the scriptures, however, all living creatures are spiritually equal. The Vedas say that material distinctions are superficial and that we are essentially not our body, but an infinitesimal eternal spark — the soul. The Vedas compare the body to an outward dress, and the wearer of the dress as the soul. On the spiritual level, therefore, distinctions between men and women are irrelevant. So, how could a philosophy which promoted equality stand by this dividing social system?

To understand Vedic societal divisions, one must understand the goal of society. The goal of society was undeviated focus on God. The purpose behind all the divisions, the rules and the regulations, was so people could live free from distractions. The Vedas encouraged men to address every woman as “Mother.” The Spiritual Teachers were the highest rung in society, even above the kings. The common thread is an undeviated focus on religion.

In addition, Vedic knowledge was meant to be passed from teacher to disciple, in a disciplic chain. Today, such rigid rules would be uncomfortable and oppressive for many. The whole point of the system, however, was to keep the knowledge alive, in a relevant manner. The spiritual teachers in the chain have the power to adjust the specifics according to time, place, and circumstance.

I’ve been raised seeing a community where gender roles are not important in spiritual pursuit and everyone has an equal opportunity to express their love for God. In my temple, women are given all the same rights as men, in fact, our temple community president is a woman, something which might still be considered radical for some traditionalists. My parents have always been on equal footing. I’ve seen them teach together, take leadership roles together. I’ve been raised seeing the importance of gender equality. Traditionally women were not allowed to worship on the altar. Today, both men and women are allowed to worship as they wish. These days women can have major leadership positions, just like men, or they can choose to serve at the grassroots level. Nothing is discouraged.

Vedic gender roles were a source of great discomfort, but as I learned more, I began to accept it for what it was. It worked for a different people, separated from us by thousands of years. Today, the same philosophy from the same scriptures is followed in a different way. My spiritual community is liberal, and yet the essence of the Vedas is preserved: love for God and all other living entities.

When he wrote this piece, Nimai Agarwal was 14 and attending high school at Friends Meeting School in Ijamsville, MD. He has been practicing Vaishnavism, a monotheistic tradition within Hinduism, since his childhood. He loves to read and write. He also enjoys painting and singing kirtan, spiritual music from India.