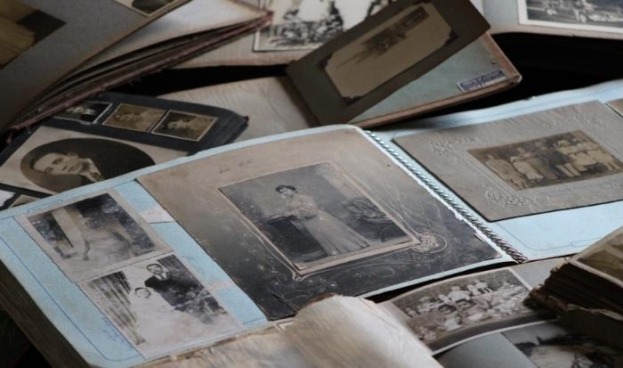 There — wedged between two volumes was a faded photo album. When did that get there? Fueled by a peculiar sense of curiosity, I gingerly lifted the album from the shelf.

Dust particles danced in the afternoon sun. It had been a weary, dreary, dreadful day — one of those long days when lethargy lingers in the air. It was the perfect afternoon for a healthy dose of nostalgia and an easy excuse for procrastination. Settling in an old armchair, I placed the album on the cream-colored desk and prepared myself for 20 minutes of photo flipping.

Peeling away the cover, a chubby face stared up at me. Ah yes, I had forgotten how ugly I was as a baby. I barely had any hair, half-bald like a middle-aged man! Pulling a face, I rapidly flipped through the ugly baby photos.

Shabby little huts had caught my attention. Some white. Some grey. All fenced away by the mountains and wilderness folding in around them. Below this picture, two little toddlers poked sticks at brown dust. The two toddlers were my cousin and me. The white huts were the homes of my relatives.

Ever since I was little, our family would journey out of the metropolitan Hangzhou city and pick through the uneven village road to the white huts, with relatives and friends sitting on dusty doorsteps, calling out to us in foreign dialects. It was a different world, where traditional values dominated, where farmers roamed the roads, where horror stories were casually told . . . baby drowned because she was born a girl, woman raped in the nearby mountains, man killed over fight for land. But as a young child, I did not see these differences. To me, grandmother was grandmother, and the village was the village. The two worlds existed as one; it was an infusion of perspectives.

Slowly, I turned my eyes away from the collection of village pictures. Off I went again, on my journey through time. I must not linger too long at one site.

Flip. Toddler at the zoo. Flip.

But slowly, as I flipped, the scenery changed again. The snow melted into sunny beaches. The people in the background morphed from black haired, tan skinned to blonde haired, fair skinned.

Eventually, my eyes rested upon a jarring page: on the top half, a primary school girl grilled chicken on a barbeque. On the bottom half, the same girl wandered through streamers and dragon dancers at Lunar New Year celebrations. It was then when I found myself navigating through a foreign culture in a foreign land. And for some reason, I was different. They say Chinese eat dumplings; Australians eat burgers; Asian people are collectivists; Western people are individualists.

But they don’t see what I see: the liminal space between two cultures. Steak ramen is a dish. Chinglish exists. So do “indillectivists” (a term in The Jasmine Dictionary that refers to people who have both individualist and collectivist traits). I found myself becoming the chasm walker who walked the path in between to close the gap between two worlds, two cultures.

But I digress. Just another immigrant story — nothing too special. Keep going.

And there — a recent picture of me surrounded by those who matter the most to me. In the family portrait, my mum smiled broadly — optimistic, progressive and open-minded; my dad stared solemnly at the camera — serious, level-headed, the embodiment of traditional values and conservative views; and there I was, clamped in the middle between my parents, with an awkward grin. Indeed, in my family, I often find myself in the middle of two polar ends. Debates over different views on politics, ideologies, life, aspirations, everything, was a common trend at the dinner table. Growing up, I often heard more disagreements than agreements. And yet, that does not change how much we love and care for each other. Our familial bond is not weakened by differences — on the contrary, it is strengthened by it.

The last rays of the sun trickled through the window frame, casting a golden slant over the desk and bookshelf. How time flies! I had expected merely 20 minutes of old photos. Oh, but no! Instead, it was an entire two-hour movie of my past — a complete reflection of my 17 years, shining, gleaming back at me as the sun bounced off each silvery page.

Flipping through the photo album has reminded me of all the complexities and nuances in my identity, of all the puzzle pieces that make up who I am today — rural and metro, Eastern and Western, traditional and progressive. Sometimes, the puzzle does not always fit neatly together. Sometimes, a piece needs to be chipped away to accommodate another. The puzzle is complex and messy and oftentimes misunderstood, but it is one that I am fiercely proud of. It represents me — the 17-year-old who is defined by differences and contradictions, who finds roots in shifting worlds, who is crafted by her past, but is the crafter of her future.

As the golden light spread its blurry fingers across the room, a warm fire burnt inside me. “Keep going,” it cooed, “there’s more to come. More perspectives in this world to discover.”

And so, I turned to a fresh page.

When she wrote this piece, Jasmine Xu was a Year 11 student in Australia. She is interested in philosophy, politics, debating, drama, and the arts. Moreover, she is always open to hearing different perspectives and enjoys thought-provoking and insightful discussions with other people.