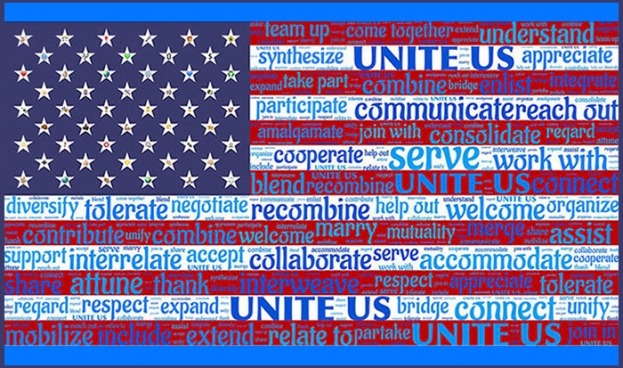 When I think about what practicing democracy in the United States means to me, I remember the framed replicas of the U.S. Constitution, the Declaration of Independence, and the Gettysburg address I had in my room through most of my childhood. I was one patriotic kid. Now I consider what values those documents espoused and whether the United States has lived up to them. Many U.S. citizens report valuing the ideals that appear in those documents, such as freedom, independence, liberty, equality, common good, and popular sovereignty.

A democratic value especially important to me but not originating in those founding documents is known as a national motto of the United States, e pluribus unum, "Out of many — one." In its most literal sense, the motto means that a single nation emerged from the union of the thirteen colonies. Many interpret it to mean "unity in diversity," i.e., that out of the multitude of people with different backgrounds and beliefs comes the commonality and unity of being citizens of the United States.

Both the past and the present of the United States demonstrate that our country has fallen for short of living up to those democratic ideals: I point out our country’s history of settler colonialism and slavery; the internment of Japanese-American citizens; and nearly a century of protests before women’s right to vote was ratified in the U.S. Constitution. In more recent history, there's been invasion of other countries, support of apartheid, and assassinations under questionable if not outright false pretenses. And currently the United States faces issues of inequality in health care, education, and income as well as widespread acceptance of racism, bigotry, xenophobia, and sexism (and a host of other present-day issues).

We need a revolution of practicing democracy within — of living up to those values internally. To that end, I recall the Rumi poem, "The Guest House," in which Rumi advises us to welcome all our emotions, whether joy, depression, shame, or malice, as guides. In a similar vein, Internal Family Systems Therapy (IFS) calls for an internal focus in which one listens to and cares for one’s internal parts. This form of psychotherapy, which was pioneered by Dr. Richard Schwartz, calls for attending to the various parts within ourselves that assume different roles, like that of the motivator, the critic, the protector, the perfectionist, and so on.

Schwartz observes that most of us, most of the time, are being led by some part or another of this internal family, but that healing takes place when a truer, deeper place within is able to listen to and honor the various parts and their needs. Thus, IFS is a means by which we can grow our self-knowledge and self-awareness to distinguish when we are living from this deeper, truer place within and when we are not — and when we are not, to identify the part of ourselves that is activated and to provide loving care to that part.

Perhaps practicing democracy within means implementing a system like Rumi’s or that of Dr. Schwartz: a system of honoring and respecting all of our emotions and parts, even those of which we are ashamed or inclined to shun; a system of increasing our awareness of our essence — the deeper, truer place within — and allowing this undiminished inner sufficiency and capacity to care for and heal all our feelings and parts, so that we increasingly live and love from our inner truth. In this way, God-willing, we experience the joy of self-acceptance and love that radiates within and around us. Honoring this multiplicity within ourselves and recognizing the deeper unity within seems like a good start for embodying e pluribus unum. Perhaps once we can successfully practice democracy within, we can successfully practice democracy in relation to our fellow citizenry as well as our brothers and sisters in humanity all over the world.


Next Post: The Dolly Mama’s Guide to Democratic Meetings