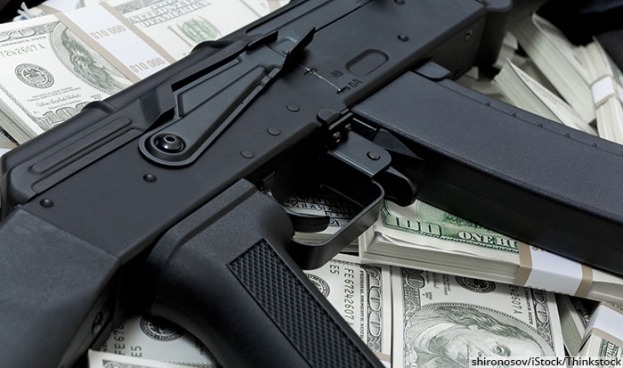 A Prayer for Ending the Global Arms Trade

Posted by Frederic and Mary Ann Brussat on December 27, 2016

Ya Salaam, O God the Peacemaker. How can we have peace when the world is being flooded with weapons? Arms are being sold throughout the developed and developing world, with the United States as the leading manufacturer. And as the Trump administration prepares to take over in Washington, there is talk of a new arms race in nuclear weapons.

News: An article on nytimes.com by Thom Shanker reports that the United States ranked first in global weapons sales last year, signing deals for $40 billion, or half of all agreements in the world arms bazaar. "The most significant overseas weapons sales for the United States last year included new agreements with Saudi Arabia, Iraq, Qatar and South Korea. Over all, the largest buyers of weapons in the developing world in 2015 were Qatar, Egypt, Saudi Arabia, South Korea, Pakistan, Israel, the United Arab Emirates and Iraq. After the United States, France, Russia and China, the study found that the major global arms suppliers were Sweden, Italy, Germany, Turkey, Britain and Israel."

"We pray for all those who bravely seek justice in the face of repression. May people across the world see the ways in which they can help – and act to end weapons sales to their oppressors. Lord hear us...

"We pray for each of the women, children and men who have been killed or injured by weapons sold by companies more concerned with making money than with making peace in our troubled world. May we, who witness on our television screens glimpses of their suffering, demand that our government curb the arms trade. Lord hear us…

"We pray for the people who finance, produce and sell weapons. May your compassion touch their hearts and minds and redirect their skills and talents to lifegiving projects. Lord hear us…

"We pray for all those who work for peace. Lord hear us . . .
Amen.
— from the Campaign Against Arms Trade