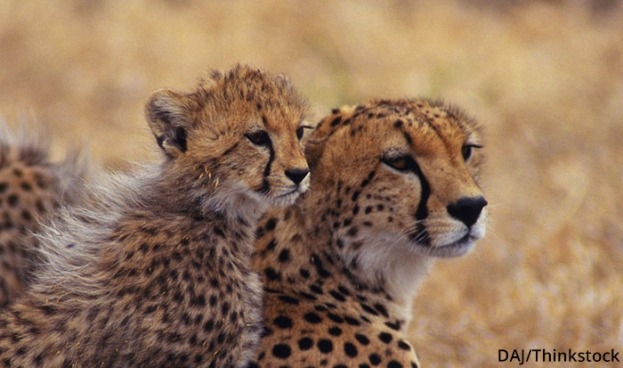 A Prayer for Cheetahs and Other Nearly Extinct Animals

Posted by Frederic and Mary Ann Brussat on January 4, 2017

"God of all creation, you created animals to roam the earth and fish to fill the seas. We pray for creatures on the verge of extinction, specifically that those responsible for poaching and polluting will be held responsible. Help us to live in a way that does not endanger life, but cherishes and nourishes the life in and around us. Amen." (Prayer for Endangered Species from the Editors of Sojourners)

Study: A new study released by the Zoological Society in London, Panthera, and the Wildlife Conservation Society reveals that cheetahs may be at greater risk of extinction than previously thought. Today, there are just 7,100 cheetahs left in the world, down from an estimated 14,000 in 1975. They have been driven out of 91% of their historic range as humans have converted wilderness areas to managed land for agriculture or livestock. Poaching of cheetahs and the killing of their prey for "bushmeat" are other causes of the population decline.

Built for speed, cheetahs are the world's fastest land animal. They have been clocked running at 70 miles per hour. Unlike other wild animals who find safety in numbers, these swift creatures are loners who learn to fend for themselves.

"God, the list of extinct species grows.
What would you have us do?
I run toward You, Friend.
I trust that You hear me.
For the hubris of our ancestors that said, THIS IS MINE
Forgive us.
Of our hubris, here and now, cure us.
Teach us how to be a friend
to feathered and unfeathered
Teach me to remember THIS IS YOURS.
I pray there is still time."
— Carol J. Adams in Prayers for Animals


Next Post: A Prayer for Ending the Global Arms Trade