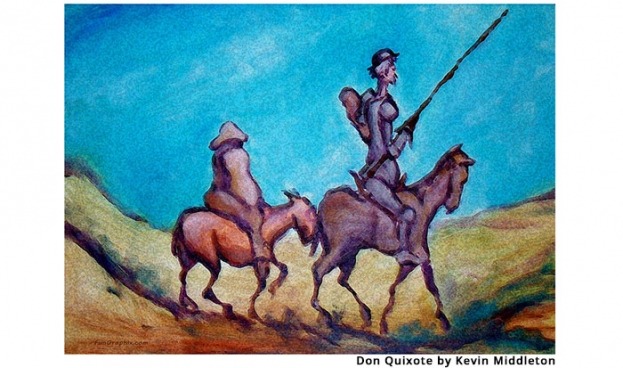 An Elder Hero for the Ages

Writer Milan Kundera is convinced that the modern era

— and with it, the novel

— began with The Adventures of Don Quixote by Miguel de Cervantes, which was published in 1605. It revolves around a delusional idealist, an elder who imagines himself to be a knight errant; he sees virgins in prostitutes and windmills as treacherous armies of giants.

Why does Kundera consider it the first novel? Previous masterpieces

— take readers into the orbit of the gods and the great heroes and heroines. But Cervante's story is about an ordinary human's adventure. Quixote is energized by his quest, and his partner, Sancho Panza, is an earthy pragmatist.

As Jasper Rees reveals on 1843magazine.com, this popular novel has
achieved a lofty status as "one of the most influential works in the entire canon of literature." Cervantes's 900 page-tome spurred "the picaresque novels" of many English writers and has been made into operas, ballets, and plays.

Our favorite offshoot is the play Man of La Mancha. Don Quixote is an elder whose spirituality consists of viewing his quest as a "holy endeavor." He musters patience and perseverance in his mission and is willing" to march into hell for a heavenly cause." All of us know what it is like to be animated by "an impossible dream," but only a few have the energy, bravery and single-mindedness to carry it out. That is why in these times trying to be a hero is such a noble calling!