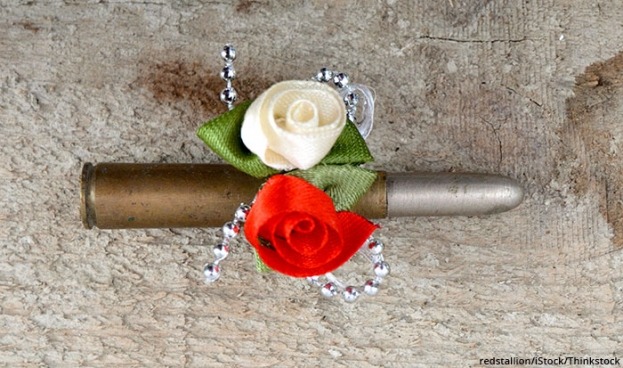 Posted by Frederic and Mary Ann Brussat on April 10, 2017

Do you remember the adulation given the American missile bombardment of Bagdad in 2003? Politicians and journalists alike were impressed with the U.S. military's ability to induce "shock and awe" while putting on a global demonstration of U.S. might and superiority.

We reread that article last week when on April 6, 2017, President Trump launched 59 Tomahawk missiles to attack the Shayat airbase in Syria. The stated intention was to punish the Assad regime for having used poison gas in an attack on the rebel-held town of Khan Sheikhoun in which more than 100 men, women, and children were killed and countless others were injured.

The effectiveness of the American bombing on destroying the airbase is unknown; it was operational again the next day. But the impact of Trump's actions was not lost on American journalists. Huffington Post put together a collage of film clips from TV and cable news the night after the attack. This act of warmaking is when Trump became "president," according to CNN's Fareed Zakaria. You can read more examples in an article about veteran newsman Dan Rather's reaction to the media coverage.

One clip in particular struck us as obscene. Brian Williams, the MSNBC newsman, upon surveying scenes of the deadly missiles being fired off the decks of U.S. Navy vessels, exuded near adoration for the sight, quoting Leonard Cohen lyrics "I am guided by the beauty of our weapons." (Cohen probably turned over in his grave at this misappropriation of his lyrics: listen to his use of them in
"I'll Take Manhattan" here.) It is hard to believe that a weapon of war designed to kill people qualifies as a thing of beauty! But that is how Williams' describes them.

That night's media coverage of a missile attack points to a larger issue. It seems that the only way to get the public's attention is to deploy weapons. In an article in The New York Times, John Herrman tallies up the ways in which everything is being weaponized:

Talking about weapons of war as objects of beauty, using war language to describe every disagreement and political conflict, and accepting the increasing escalation of linguistic weaponry is not going to help us find peace or even survive. It is time to put down our weapons.

Religious teachers have known this through the centuries. In Awakening the Buddhist Heart, Lama Surya Das gives an example.

"The great Indian sage Shantideva, whose name means the 'Gentle Master,' lived in the 7th and 8th century. He spent his life teaching others how to see the equality of self and other, and to act from this belief. He said that if you raise even one hand in a gesture of reverence to anything or anyone, all the Buddhas clap, rejoice, and rain down blessings. Shantideva lived in a world where people regularly put two hands together and bowed. Yet he taught that even one hand could make a difference.

"In a practical sense, raising a hand in reverence means that we must put down our weapons. After all, it's difficult to harm or manipulate someone when you are bowing to them."

Instead of marveling at a display of force and military might, instead of using war language, let's raise our hands in gestures of reverence. What a difference that could make!