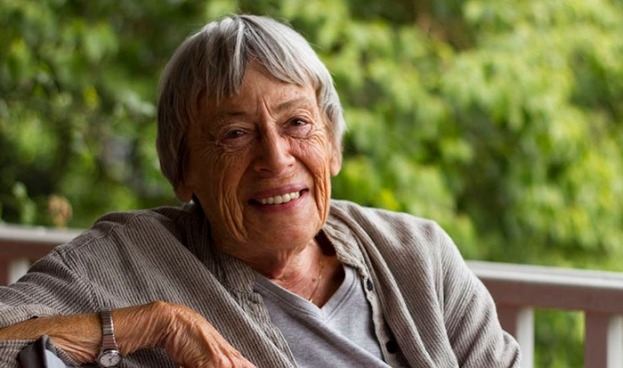 Posted by Frederic and Mary Ann Brussat on January 25, 2018

Writer Ursula Le Guin died on January 22, 2018; she was 88. She believed that the imagination is "the single most useful tool humankind possesses." She certainly proved that to be true, turning the free exercise of her imagination into a spiritual practice.

Immensely creative and prolific, Le Guin wrote more than 20 novels, dozens of books of poetry, 100 short stories, seven collections of essays, 13 children's books, and five translations, including her much heralded Tao Te Ching of Lao Tzu. Her books have sold millions of copies around the world.

In 1974, she won the Nebula Award for the future-facing novel Dispossesed in which she carefully and convincingly fashioned a society based on the political philosophy of anarchism. Anarus is an evolutionary society with no government, laws, property, currency, or competition. The citizens live collectively, work for work's sake alone, and nourish their community life on mutual sharing and cooperation. This deep sci-fi story helps us develop a future consciousness; raises the right questions about the quality of life; and shed lights on our contemporary institutions and ideas.

Another favorite of ours by Le Guin is Language of the Night: Essays on Fantasy and Science Fiction where she comments on the works of Stanislaw Lem and Philip K. Dick. In response to those who label fantasy an escape from, life, the author quips: "Children know that books about unicorns, if they are good books are true books." And then she hurrahs science fiction as "the capacity to face an open universe."

At the 2014 National Book Awards. Ursula Le Guin was given the Medal for Distinguished Contribution to American Letters. What a perfect choice!