By Colman McCarthy
Coleman McCarthy on teaching nonviolence to his students.

"The students I’ve been with these twenty years are looking for a world where it becomes a little easier to love and a lot harder to hate, where learning nonviolence means that we dedicate our hearts, minds, time, and money to a commitment that the force of love, the force of truth, the force of justice, and the force of organized resistance to corrupt power are seen as sane and the force of fists, guns, armies, and bombs insane.

”Over the years other teachers have suggested that I offer what they call 'balance' in my courses, that I give students 'the other side.' I'm never sure exactly what that means. After assigning students to read Gandhi, should I also have them read von Clausewitz? After Martin Luther King's essay against the Vietnam War, Colin Powell's memoir favoring the Persian Gulf War? After Justice William Brennan's and Thurgood Marshall's views opposing the death penalty, George W. Bush's and Saddam Hussein's favoring it? After a woman's account of using a nonviolent defense against a rapist, the thwarted rapist's side?

”What I have surety about is that students come into my classes already well educated, often overeducated, in the ethic of violence. The nation's long-tenured cultural faculty: political leaders who fund wars and send the young to fight them, judges and juries who dispatch people to death row, filmmakers who script gunplay movies and cartoons, toy manufacturers marketing 'action games,' parents in war-zone homes where verbal or physical abuse is common, high-school history texts that tell about Calamity Jane but not Jane Addams, Daniel Boone but not Daniel Berrigan." 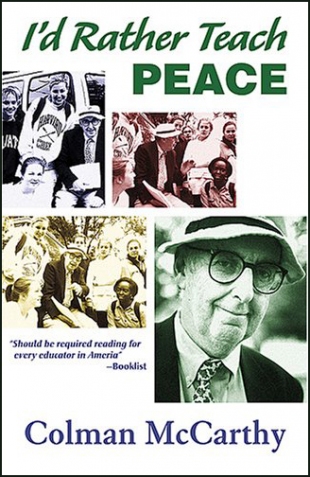